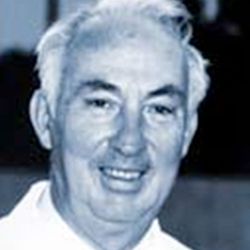 Norman Shumway can be regarded as the true pioneer of cardiac transplantation and especially should be remembered for rescuing the procedure from the mire of bad publicity that accompanied the first heart transplantations in the late 1960s. 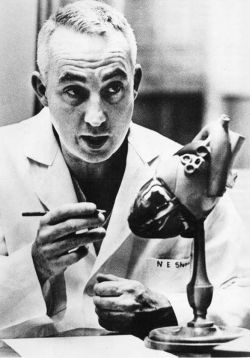 humway was born in 1923 in Kalamazoo, Michigan, and after a period at the University of Michigan as a prelaw student, he was drafted into the army in 1943. At that time he took an aptitude test that showed that he had promise as a physician, and he then had the choice of staying in the army or going to medical school. He quickly decided to go to medical school. After a rapid premedical course at Baylor University in Waco, Texas, he took his medical degree in 1949 at Vanderbilt and then joined the outstanding Department of Owen Wangensteen at the University of Minnesota to train in surgery. During his residency he served in the Air Force at the time of the Korean War. While at Minnesota he completed a PhD, studying the effects of temperature on altered rhythms of the heart beat. This experience with hypothermia and its effect on the heart was to prove invaluable a few years later. It is of interest that Barnard was also working in the same department as Shumway for part of the time.

In 1958 he moved to Stanford University where he was joined by a trainee heart surgeon with an interest in transplantation, namely Richard Lower. Initially they explored the effects of local hypothermia on the heart, and after inducing cardiac arrest, they realized that the heart might be transplanted. In 1959 they successfully performed their first experimental heart transplantation in a dog that survived for 8 days, showing that the procedure was technically possible. From this they developed the current technique, which was different from any that had been used previously in that part of the recipient heart was left in situ, thereby facilitating the anastomosis of the donor heart to the remnant of the recipient heart.

In November 1967, after nearly 10 years of research and more than 300 experimental heart transplantations in dogs, Shumway announced that he was ready to perform a human heart transplantation. However the right donor and recipient did not appear at the same time, and he was beaten to the punch by Barnard in Cape Town who performed the first transplantation on December 3, 1967. This was unfortunate because the publicity associated with Barnard's activities after this first transplantation was unsavory in many respects, whereas Shumway, who shunned media publicity, would not have generated the same sensational media attention and the frenzy of cardiac transplantations that followed during the next two or three years. That being said, there was enormous publicity associated with the operation at Stanford as a result of a leak to the press, and in contrast to Barnard who reveled in the media attention, Shumway was extremely uncomfortable with the resultant media attention.

When cyclosporine became available in the early 1980s, the results of heart transplantation improved markedly, and indeed more than 70,000 human heart transplantations have been performed around the world since then. Approximately 85% of recipients live for at least one year and 70% for five years. In 1981 Shumway, with Bruce Reitz, performed the first combined heart and lung transplantation at Stanford, and this also became a well-established procedure in selected patients. By the time he retired in 1993, at the age of 70, his unit had performed some 800 cardiac transplantations.

Shumway was appointed as Chief of the Division of Cardiothoracic Surgery in 1965, but in 1974 a separate department was established and this he chaired until his retirement in 1993. He was an outstanding chairman and trained his young surgeons by assisting them. It was often said that he was the most talented first assistant in surgery. He alternated his residents between general surgery and cardiothoracic surgery training, and it has been said that one of his residents performed a heart transplantation before he had performed his first inguinal hernia repair. Stanford became a Mecca for all cardiothoracic surgeons wishing to be trained in cardiac transplantation, and innumerable leaders in the field from all around the world can be grateful for the experience and training they received in his unit at Stanford.

Norman Shumway had a delightful sense of humor and was never short of the wry comment, such as at his 70th birthday party where he noted that it was “like being at an awake wake!” He was also a keen golfer, and certainly in his latter years insisted on regular rounds of golf each week, which he considered a truly laudable activity and which he pursued with the same enthusiasm as he did cardiac surgery. Indeed the highlight of his golfing career was to play in the Pro-Am AT and T at Pebble Beach in 1993.

Without question Norman Shumway was one of the great pioneers of organ transplantation and was awarded the Medawar Prize of The Transplantation Society in 1992 for his huge contributions to the field. This seemed so appropriate because he had always admired Peter Medawar enormously and attributed his lifelong interest in transplantation both to him and Joe Murray.

Norman Shumway died on February 10, 2006, the day after his 83rd birthday, of complications from cancer. He leaves a former wife, Mary Lou, whom he married in 1951, and four children, Lisa, Amy, Michael and Sarah, who is now the Director of the University of Minnesota's Heart Transplant Program. The full circle has been completed!

Norman Shumway was awarded the Medawar Prize in 1992 for his career pioneering heart surgery and heart transplantation.

Norman E. Shumway - The Dawn of a New Era- Standing on Tall Shoulders

In 1960, with the new buildings completed, Stanford University Medical Center blossomed in Palo Alto, CA. The first chairman of surgery at the new campus was Dr. Garrott Allen, from University of Chicago. With the immeasurable influence of Dr. Ann Purdy and her husband, Dr. Emile Holman, they contacted Dr. Allen and resolutely recommended Dr. Shumway for the position of Chief of Cardiac Surgery. Dr. Allen invited Shumway to visit him on the campus and, quoting from Dr. Lower: “fill the position as Chief of Cardiac Surgery until such time as a big name surgeon could be recruited.”

Thorac Cardiovasc Surg, November 1999 The American Association for Thoracic Surgeryestablished the AATS Scientific AchievementAward in 1994, and John W. Kirklin, MD was the firstawardee in 1995. At the 1998 AATS meeting in Boston,President Floyd D. Loop presented the second AATSScientific Achievement Award to Norman E. Shumwayfrom Stanford University Medical School. DrShumway was the president of the AATS in 1987.
See full article

50 years of Heart Transplant at Stanford

Sorcerer’s apprentice: A surgeon reflects on his role in the first U.S. human heart transplant.