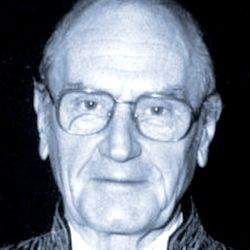 René Küss is one of the ‘fathers’ of organ transplantation. Rather than following the history of Professor Küss’ career, it would be more appropriate to consider the main aspects of his huge personality. The word ‘fear’ is absent from his vocabulary. He had no fear in 1940 when he survived the Mers El Kebir battle of the Second World War, when the destroyer ‘Mogador’ on which he was a surgeon, sunk. He had no fear when in 1954, during the car race ‘Tour de France Automobile’ he crashed by driving for too long and spent several days in a comatose state.
Read More 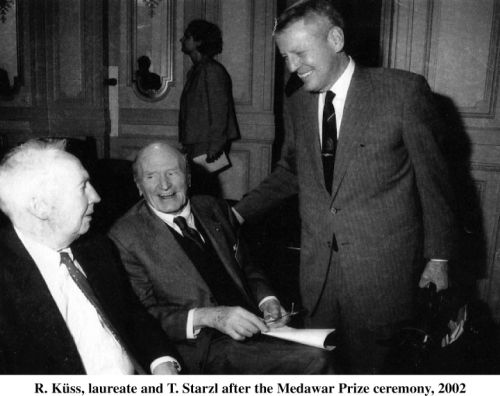 He was not afraid to make inventions in the operating theatre. He invented two surgical techniques which will remain forever: the Boari-Küss technique for ureteral elongation; and the Küss technique for kidney transplant graft implantation into the extraperitoneal site in the iliac fossa, and anastomosing the renal artery and femoral artery, completely at variance with the graft implantation to the inguinal site, as developed by D. Hume.

This boldness appeared very early in the life of René Küss, especially in medicine. Medicine and surgery were a long family tradition and René Küss’ father was head of the general surgery division in the ‘La Charité’ Hospital in Paris, which years later became Hôpital Broussais. Thus, it was natural for him to become a surgeon. Some students only chose a career in surgery at the age of 25, but René Küss’ first visit to an operating theatre, his father's unit, was at the age of 7. It was then that he decided to be a surgeon, and entered medicine as a religious vocation. He graduated from the University of Paris, School of Medicine and served as a resident surgeon at the Broca Hospital, Paris, under the Service Head, Professor Robert Proust, the brother of the famous French writer Marcel Proust (his books include ‘A la Recherche du Temps Perdu’). He became ‘interne des Hôpitaux de Paris’ in 1939, at a time when the progress in surgery, anaesthesiology, radiology and other disciplines was developing exponentially.

The war came, he did his military service in the French army, and he still operated. Later, he led the surgical team of General Patton's 3rd American Army and participated with the French Resistance in the liberation of Paris, alternately manipulating scalpels and grenades.

After the war, René Küss took the post of Assistant in the service of Professor Fey, Chief of Urology, at Cochin Hospital. Thereafter, his career was dedicated to urology. Why urology? Because renal cavity opacification, namely intra-venous pyelography, appeared in 1937 and urological operations were for the first time preceded by an exploratory phase: radiological diagnosis.

Several years later, René Küss became a full professor of surgical pathology. When the post of Chief of Urology became vacant at both St. Louis Hospital and at the Foch Hospital, René Küss created a multiple department of urology in Paris Hospitals. Then in January 1951 came the historic 12-day period in which René Küss, Charles Dubost and Marceau Servelle first performed the extra peritoneal renal transplantation procedure, commonly used today and called the ‘Küss operation’. Oeconomos and Rongeulle, from the teams of Dubost and Servelle had helped René Küss to develop the operation in the experimental laboratory. Dubost and Servelle obtained their renal allografts from the same guillotined convict donor, whereas René Küss used a free kidney that had been removed from another patient for therapeutic purposes. Needless to say, René Küss was shocked by the deaths of hundreds of young patients attending Professor M. Legrain's nephrology unit in the Foch Hospital suffering from irreversible chronic renal insufficiency.

A total of nine patients underwent transplantation, all nine patients rejected their graft and René Küss predicted in his famous publication in Memoires Academie de Chirurgie (1952) ‘about some cases of renal allograft in humans’…. ‘in the present state of knowledge, the only rational basis for kidney replacement would be between monozygotic twins…’

René Küss was right at the time, because allogeneic transplantation was performed successfully without any immunosuppression and only in the compatible blood group A, B, O system. Like Jaboulay, Voroney and others who had worked with xenotransplantation, René Küss came up against what was to become a new discipline: immunology, and transplant immunology is the most complicated aspect of immunology.

The first success was by Murray in 1959 in Boston with monozygic twins, and then with dizygotic twins with total body irradiation. Five months later J. Hamburger's team in Paris succeeded, and in 1960 René Küss obtained the first long-term graft survival (18 months was an achievement at that time!) in three recipients grafted in allogenic contexts. In 1960 René Küss was the first to use the immunosuppressive regimen based on chemotherapy invented by Tom Starzl and Roy Calne, namely 6-mercaptopurine and prednisone.

René Küss worked also on graft perfusion with blood, and on warm and cold ischemia in animals. He also contributed substantially with Mollaret and Goulon to the concept of ‘‘brain death’’ and harvesting perfused organs from a deceased cadaver.

In 1966, he did his first xenotransplantation, a pig kidney into a man. The outcome was hyper-acute rejection; the ignorance of xenoantibodies at the time recall the first experiment of Jaboulay in Lyon in 1906, when he transplanted a goat kidney into a young uremic patient by anastomosing the renal artery to the humeral artery at the elbow.

Afterwards, René Küss accumulated inventions and honours. He created the French Transplantation Society in 1971, a regional organ-sharing program in France to avoid prolonged ischaemia, he described the pyelographic signs of rejection on IVP, and developed ex-vivo resection of kidney cancer and iliac re-implantation. René Küss became President of the French Academy of Medicine in 1988. His name is engraved in marble at the hospital of Pitié-Salpêtrière where he founded his famous school of urology and received the Medawar price in 2002 from the hands of his friend, Tom Starzl.

But was René Küss only a giant in the operating theatre like Vulcan in his forge? Of course, not! René Küss was also a hunter, an explorer, but most of all a connoisseur of fine arts, especially paintings, having been introduced to the arts by his father. As early as 1933 at Honfleur, he befriended the main French painters, Dufy, Friez, Saint Delis, Gernez, and Herbo. He subsequently became President of the Honfleur Artists Society, which ran famous historical retrospective exhibitions, including one for Boudin in 1992.

René Küss himself has one of the most beautiful private collections of paintings, worthy of a museum.

René Küss received the War Cross with palm leaves, and was appointed commander of the French Legion d'Honneur. His family, his professional activities, and his devotion to the arts have filled his life over a span of 93 years to a level almost never achieved by any man or woman. It should never be forgotten that René Kuss is anchored by two things: he is Alsacian and a Protestant!

All the transplant community must thank him and remember the sentence of Ecclesiastes in latin ‘facio quod potui, faciant meliora potentes’, aimed at the next generation, which means ‘I did the best I could, try to do better…’

It is a privilege to be here today. First of all, I would like to express all my gratitude to Dr. Salvatierra and to the Medawar committee. In addition to the pleasure that I feel in being a re-cipient of this prize, which I know to be of the high-est significance, there are two other reasons for my appreciation.

During an historic 12-day period, between January 12 and January 20, 1951, in Paris, Rene Küss, Charles Dubost, and Marceau Servelle first performed the extraperitoneal renal transplant procedure in common use today. Oeconomos and Rougeulle, who were members of the Dubost and Servelle teams, had helped Küss develop the operation in the experimental laboratory.

It has often been said that the surgical problems of transplantation were solved and that the last step towards definitive success was immunological. If this assertion is partly true, in the experience of our group, based on 34 cases, we have found that the surgical aspect of kidney grafting remained pre-eminent.