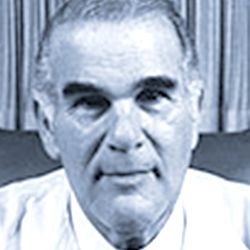 “Larger than life” has become a cliché through overuse, but is a truly apt phrase to describe John S. Najarian: athlete, surgeon, teacher, innovator, colleague, and leader. Najarian, a giant in the field of solid organ transplantation, died September 1 at age 92 in Stillwater, Minnesota.
Read More 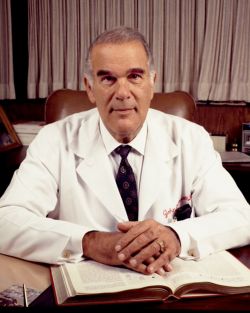 John Sarkis Najarian, of Armenian heritage, was born in 1927 and raised in Oakland, California as one of the three siblings. His father died before Najarian reached high school; he and his siblings were raised by his mother.

Nevertheless, John Najarian led a charmed life with a series of impressive achievements. At 6’4”, he was an imposing figure and a talented athlete. He earned his undergraduate degree at the University of California, Berkeley, studying a premedical curriculum while playing on the UC Golden Bears football team under the famous coach Pappy Waldorf. He completed college in 3 years—meaning he was still eligible to play football for the Bears in the 1949 Rose Bowl, at the same time as completing his first year at the University of California, San Francisco’s Medical School. Although the Bears lost that year’s Rose Bowl game, Najarian remained a lifelong football fan and he passionately followed both the Bears and his adoptive home state’s team, the Minnesota Vikings.

Najarian finished UCSF with his MD degree in 1952. After an internship year, he joined the Air Force. He reported in an oral history project for the ASTS that 1954 was a particularly auspicious year for him. Hearing about the landmark, proof-of-concept procedure achieved by the transplant team at the Peter Bent Brigham Hospital in Boston—the first live donor kidney transplant performed between identical twins—inspired Najarian to change career aspirations from cardiac surgery to the nascent field of transplantation. He sought additional training in transplant immunology following his surgical residency and went to work with Dr. Frank Dixon, chair of the pathology department at the University of Pittsburgh. He moved with Dr. Dixon’s group to La Jolla, California, in 1961, when Dr. Dixon established the Division of Experimental Pathology at Scripps. Najarian studied the allograft response and tolerance induction as a means to circumvent the allograft response.

Najarian’s meteoric rise in only 4 years from assistant professor to full professor and then vice chair of the department of surgery attests to his early recognition. He was awarded a prestigious Markle Scholarship and was heavily sought as a chair candidate. Although he was offered more than 10 chair positions, Najarian accepted a position at the University of Minnesota. He reported being motivated to move because he wanted a more sedate atmosphere in which to raise his four sons and was disquieted by the “hippie” lifestyle popular in San Francisco. He was also impressed by his Minnesota predecessor Owen Wagensteen’s commitment to active research; he noted that every U of M Surgery faculty member was involved in active research, in addition to clinical practice. Najarian served as department chair for 26 years.

The training program Najarian fostered followed the Wagensteen lead: 2–3 years of surgical training was dedicated to creative activity that included both basic science and clinical research. Najarian developed a vibrant transplant program using a multidisciplinary team-based approach partnering with nephrology, hepatology, pediatrics, and endocrinology. This approach has since become the norm in leading transplant programs. During his tenure, Minnesota became a powerhouse in transplantation surgery. Najarian joined the pantheon of transplant giants such as Thomas Starzl and Norman Shumway with many firsts in advancing transplantation. He championed kidney transplants in diabetic patients and the smallest pediatric patients—neither group had had access to renal transplantation before this. His group pioneered pancreas transplantation, live donor pancreas transplant, and islet transplantation. The University of Minnesota was also an early leader in the field of liver transplantation and Dr. Najarian’s most famous patient was Jamie Fiske. Fiske underwent liver transplant at 11 months old, after her father was televised making an emotional plea for a donor to a meeting of the American Academy of Pediatrics in 1982.

Najarian’s competition with Starzl became legendary; one of their major points of dissention was the use of live kidney donors—Najarian was an advocate and Starzl was opposed. Najarian’s development and promotion of Minnesota antilymphocyte globulin (MALG) as a potent immunosuppressant was a major advancement for the field, but also represented his undoing in a high-profile legal battle; the FDA shut down the ALG program in 1992 and Najarian stepped down as department of surgery chair in 1993. Najarian was primarily charged with conspiring to defraud the Food and Drug Administration. The judge dismissed the ALG conspiracy and fraud charges, and the jury acquitted him on other charges. Although exonerated by the legal system, he did not resume his leadership activity.

John Najarian was, however, a natural leader. He was a founding member of the American Society of Transplant Surgeons and served as its fourth president in 1977. He served as chair of the ASTS Fellow Training Committee from 1980 to 1990, setting the standards for transplant training programs in the United States. In 1988, he served as president of the American Surgical Association.

He also had a high impact internationally. Throughout his tenure as chair at Minnesota, international visitors flocked to Minneapolis to study the innovations being made there. He was elected president of The Transplant Society (TTS) in 1994 and was awarded the TTS Medawar Prize in 2004, the highest honor bestowed by that organization. In recognition of his pioneering work in pediatric transplantation, he served as president of the International Pediatric Transplant Association in 2001.

John Najarian’s wife of 67 years, Mignette, died in 2019, and his son Paul died in 2014. He is survived by his three other sons Peter, Jon, and David, 12 grandchildren, and four great grandchildren. He is also survived by thousands of admiring students, fellows, colleagues, patients and their families, all who celebrate the life of this gentle giant.

When I received word of this wonderful honor, it caused me to reflect back on my career in transplantation.

Over 45 years ago, my education in this field began with a three-year fellowship in immunopathology with an outstanding group of immunologists, including Frank Dixon, Joseph Feldman, Charlie Cochran, Joseph Vasquez, and Bill Weigle. That fellowship began in Pittsburgh, in 1960, and then as a team (Figure 1) we moved to La Jolla, California in 1961. My three years in basic immunology at the Scripps Clinic and Research Foundation resulted in a variety of studies, primarily with Feldman and Dixon, that elucidated the mechanisms of delayed-type hypersensitivity. We used labeled lymphocytes to demonstrate the cellular traffic accompanying this reaction. Our studies were reported in the Journal of Experimental Medicine, Immunology, New York Academy of Sciences, and the Lancet. In addition, our team defined the function of sensitized lymphocytes in homograft rejection along with the role of antibody in this response. Our investigations led to a quantitation of transplantation immunity as demonstrated in our series of experimental models.

The skill, science, and soul of the surgeon.

I am truly honored and grateful to you for the trust you have bestowed on me by electing me president of such a distinguished association. This honor obviously reflects recognition of those from whom I have learned so much: my mentors, colleagues, residents, and, finally, students.