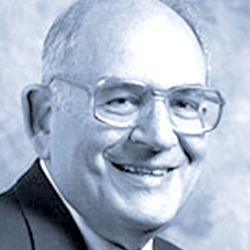 It is with great pleasure that I introduce my former mentor and colleague, and my friend, Dr. Richard L. Simmons, recipient of a 2004 Medawar Prize from The Transplantation Society. For 36 years he has been a colleague of two other Medawar Prize recipients: from 1968 to 1987, he worked with Dr. John S. Najarian (one of this year’s co-recipients) at the University of Minnesota, and from 1987 to the present, with Dr. Thomas E. Starzl at the University of Pittsburgh.
Read More 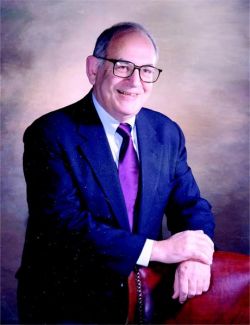 At the University of Minnesota, he was part of a duo (with Dr. Najarian) in the creation of one of the great academic transplant programs. At the University of Pittsburgh, he chaired its Department of Surgery for 11 years; since 1996, he has been medical director of its Medical Center, focusing primarily on elimination of medical error. Of course, there was life before both Minnesota and Pittsburgh.

In 1966, following the completion of his surgery residency, United States involvement in the Vietnam War deepened, and Dr. Simmons was immediately drafted into the military. He was chief of the U.S. Army Surgical Research Team in Vietnam, became an expert on resuscitation after major injury, and produced a series of papers on use of fluids and crystalloids that became classics in the trauma literature. A picture of Dr. Simmons taken during his Army career vividly shows his brilliance and intelligence. One just has to look in his eyes to see that he is a special person.

In 1968, Dr. Simmons completed his military tour. He was immediately recruited to the University of Minnesota by Dr. Najarian and moved to Minneapolis, where he lived for the next 19 years. It couldn’t have worked out better. Dr. Simmons often joked that his job was to make Dr. Najarian famous, but he himself also became famous. The affection of the two for each other lent a special aura to the academic transplant program, which expanded with the addition of other faculty members beginning in the 1970s. The stimulus that Dr. Simmons gave to academic productivity by fellows and junior faculty was of the highest magnitude, as reflected in one of his many sage pieces of advice to everyone during his time at Minnesota: “Write up everything, everything. If I haven’t heard of it, there are others who haven’t either.”

Dr. Simmons’ bibliography contains more than 1300 articles written with more than 400 co-authors on a wide variety of topics. Of these 1300 articles, nearly 1000 were written at the University of Minnesota, where he led research projects on tumor immunology, on alteration of tissue immunogenicity, on nearly every aspect of transplantation, including numerous clinical trials, and, most significantly, on infectious disease. His bibliography ranges from the curious to the classic.

In 1987, after 19 years, Dr. Simmons left the University of Minnesota to become chairman of the Department of Surgery at the University of Pittsburgh, home of another great academic transplant program, led then and now by Dr. Starzl. Wherever Dr. Simmons went, the intellectual environment was enhanced. I was very, very sorry to see him leave Minnesota. It was like losing an arm or a leg.

Dr. Simmons served as president of the American Society of Transplant Surgeons, the Society of University Surgeons, and the Surgical Infection Society. He was also a Markle Scholar in Academic Medicine. He was elected to the Institute of Medicine of the National Academy of Science in 1994.

His seminal contributions to the field of transplantation include pinpointing the cause—namely cytomegalovirus (CMV) infection—of the so-called “transplant fever” that plagued transplant recipients in the early days (and continues to do so today, though to a lesser degree with the development of antiviral agents for prophylaxis). He also elucidated the role of Epstein-Barr virus (EBV) in the development of posttransplant lymphoproliferative disease (PTLD), a feat carried out with Dr. Douglas Hanto, at that time a transplant fellow at the University of Minnesota. Dr. Simmons was the earliest transplant pioneer to note the triggering of rejection by infection, and of infection by rejection, and the first to devise effective infection prophylaxis.

But dry facts do not capture the mentality and humanistic spirit of the man. Making rounds with Dr. Simmons on the transplant service at the University of Minnesota was an intellectual feast, as the transplant fellows, as well as the abundance of visiting scholars and observers from around the world, would attest. On rounds he might be surrounded by a fellow from Europe, an observer from Asia, and a visitor from another university, along with the usual residents and staff members involved in patient care. Every nuance of every problem was dissected. Every therapeutic decision had its rationale challenged. If you didn’t know anything about game theory before starting rounds, you knew when you finished.

His office door was always open. He would work on a grant and carry on a simultaneous conversation, challenging those engaged to match his quick wit.

Former fellows love to quote Dr. Simmons. His most famous lines were designed to make people think out of the box. “Neutrophils can’t swim and eat at the same time” was from his research on peritonitis and on the role of peritoneal lavage; in other words, don’t leave the fluid in because neutrophils phagocytize as they crawl on surfaces, not while floating. “Why are you killing my patients?” may seem crude, but it emphasized the need to think and to know when to deviate from protocols to avoid iatrogenic complications. He was progressive: “A surgeon is an internist who operates”; “The history of surgery is the history of doing the wrong operation.”

His many interests outside of science and medicine include collecting rare textiles, from Africa to Haiti. He donated more than a thousand for display in the Minneapolis Institute of Arts; others line rooms and halls in his home. He is still personally hanging recent acquisitions.

A family man, Dr. Simmons has two grown daughters. Their mother, the late Roberta Grodberg Simmons, Ph.D., was a sociologist who became famous for her research on the dynamics of living organ donation. Now happily remarried, Dr. Simmons has a growing extended family.

I must stop. Dr Simmons must give his lecture. It is with great pleasure that I introduce this intellectual giant, friend, and humanitarian.

Thank you. I am grateful to the nominating committee, the Society, and my mentors on the podium with me (Paul and John), without whose help and collaboration, I would not be here.

In addition, many thanks to Novartis who supports this very special award. It is an honor in the “wildest dream category” to join these heroes as a cowinner of the Medawar Prize. I worked closely with Drs. Bach, Monaco, Najarian, Russell, and Starzl among the past awardees and I may well be at the award ceremony because of their work.

The question is: “What in the world did I ever do to deserve this?”

The increasingly routine use of prosthetic vascular grafts has revolutionized our ability to reperfuse and salvage patients with severe peripheral vascular disease. It is estimated that more than 60,000 vascular graft prostheses are implanted in the United States yearly.

Renal Transplantation in Infants and Children

Young children have not generally been considered idea1 candidates for renal transplantation although excellent results have been reported by a number or investigators.

Collsiderable discussion has recently revolved about the role of placents as an alogeneic to the pregnent mother. Most investigations have been concerned with the immunologic reaction of the mother to foreign anitgens she bears.

Am. Soc. of Transplant Surgeons