We look forward to seeing you there!

The deadline to submit an application to the ISN - TTS Sister Transplant Center Program is October 1, 2017 (for 2018). 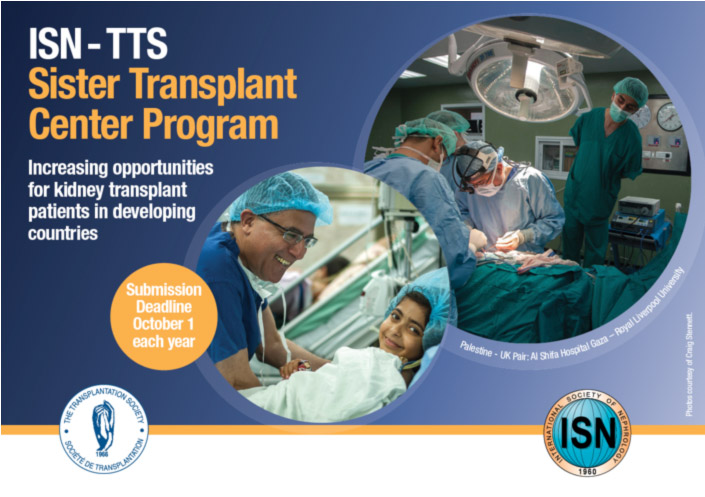 Data compiled by Quintiles IMS, an American health-care-information company, and supplied to The Post, shows China's share of global demand for immunosuppressants is roughly in line with the proportion of the world's transplants China says it carries out.

Join us for this innovative but also challenging comprehensive scientific program that will cover all important topics in reconstructive transplantation. A professional conference venue in the charming city of Salzburg has been identified already to host our varied program. We look forward to welcoming you in Salzburg,

First Successful Double-Hand Transplant in a Child
Sept 19 - As reported in the Lancet Child and Adolescent Health, Amaral and colleagues performed the first ever double-hand transplant in a child, which took place at the Children’s Hospital of Philadelphia. The recipient was an eight-year-old boy who had lost both hands and both feet due to a staphylococcal infection at two years of age. Due to a kidney transplant at about four years of age, the patient was already immunosuppressed, and had good use of his remaining limbs.

IHQ Note: Important issues like this one will be discussed at the upcoming ISVCA meeting in Salzburg, Austriafrom October 26 to 27 - www.isvca2017.org

In Algeria, taboos and law deter organ donors
Sept 17 - Sun Daily - in Algeria and across the entire Maghreb in North Africa, many people continue to suffer or die because of the lack of donors.

India - Children eating rat poison on rise, risk complications
Sept 15 - The Times of India - Think twice the next time you place pest control chemicals to get rid of rodents in your house as they can put the life of your child at risk. Doctors have warned of severe health complications which may even necessitate liver transplantation in small children who accidentally eat rat killer poison cakes, especially in cases when it happens more than once.

The Canadian Society of Transplantation and The Cell Transplant and Regenerative Medicine Society are pleased to co-host the 2017 CST-CTRMS Joint Scientific Meeting in Halifax, Nova Scotia from September 26 to 29, 2017 in the Halifax World Trade and Convention Centre.