Click here for more information and to SUBMIT YOUR ABSTRACT 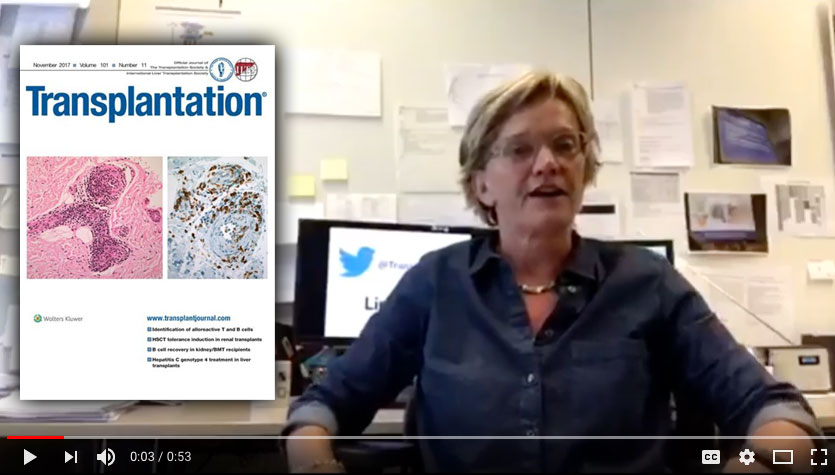 TRAINEE TRACK WEBINAR EPITOPE MATCHING: WHAT IS IT, AND WHAT IS ITS RELEVANCE?
WEDNESDAY, NOVEMBER 22, 2017, 11AM EST (MONTREAL TIME)

We look forward to receiving YOUR ideas on the topics, speakers, interactive workshops and general comments by December 1, 2017.

The Scientific Program Committee will appreciate your feedback greatly!

The symposium will also provide state of the art information to established physicians, surgeons and allied health professionals who participate in the care of children before or after solid organ transplantation. In this case, a registration fee of $150/ person applies. Maximum capacity for established practitioners will be 50.

TTS and partnering affiliated societies are offering many awards for TTS 2018. All awards require abstract submission, please visit our website for more details.

November 8 - This October, as the fall leaves changed colors, Dr. Amy Waterman flew to Toronto to represent UCLA, Explore Transplant, and Health Literacy Media at the launch of a provincial initiative to increase the rates of living donor kidney transplants in Ontario. Explore Transplant Ontario is one of the interventions being championed for use within the Access to Kidney Transplantation and Living Donation Strategy, an initiative being sponsored by the Ontario Renal Network (ORN) and the Trillium Gift of Life Network (TGLN) for the next five years.

- Dr. Amy Waterman is part of the Pillar for Sex and Gender, led by the Women in Transplantation. Dr. Istvan Mucsi and Dr. Marta Novak are advisors of the TTS Education Committee’s working group on patient wellness. Are you interested in joining these initiatives? Contact TTS at committees@tts.org

November 8 - German scientists have developed a novel nuclear medicine test that can determine whether a kidney transplant patient has developed infection in the transplanted tissue. The study, which utilizes positron emission tomography/magnetic resonance imaging (PET/MRI), is presented in the November issue of The Journal of Nuclear Medicine.

The FDA has approved letermovir (Prevymis) to prevent cytomegalovirus (CMV) infection in adult CMV-seropositive patients treated with an allogeneic hematopoietic stem cell transplant (HSCT), based on a significant reduction in CMV infection rates in a phase III study.

November 7 - Womb transplants are again in the news as Richard Paulson, president of the American Society for Reproductive Medicine (ASRM), said there was no reason to believe that the treatment could not work for transgender women at recent conference in Texas. The ethical issues of performing a womb transplant for a transgender women are substantially the same as the issues facing ciswomen.

Older donor lungs should be considered for transplantation

November 9 - With a scarcity of lungs available for transplantation, the use of lungs from donors older than age 60 has been shown to achieve reasonable outcomes and should be considered as a viable option, according to new research.

November 7 - Stem cells have been a boon to biological research, allowing researchers to visualize and develop potential therapies for diseases where intervention has hit a wall. However, not all stem cell therapies are as simple as adding undifferentiated cells to damaged areas, allowing natural biological processes to take hold.

November 10 - A desperately ill man's life has been saved after doctors gave him a transplant using a 'dead' heart they had brought back to life. Medics used a pioneering piece of technology dubbed a 'heart in a box' which can keep a heart preserved and beating for up to eight hours.

November 11 - Sixteen months after groundbreaking transplant surgery gave a Wyoming man a new face after living a decade without one, he met the woman who had agreed to donate her high school sweetheart's face to him. Sitting in a library at the Mayo Clinic in Rochester, Minnesota, Lilly Ross reached out and touched the face of Andy Sandness, prodding the rosy cheeks and eyeing the hairless gap in a chin she once had known so well.