There is a new documentary on the late Thomas Starzl includes many interviews from current TTS Members. The documentary recently premiered in California and the next screenings will be held on April 7 and 8 in Cleveland, Ohio, USA. 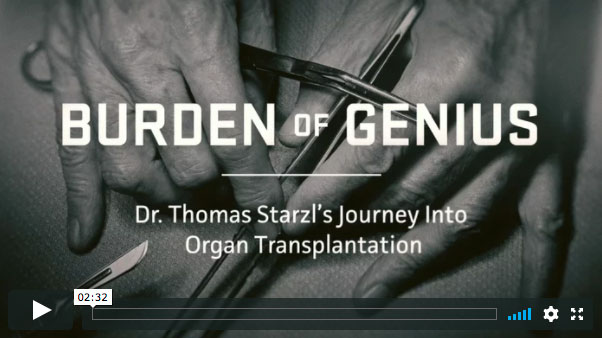 Socioeconomic Inequalities in the Kidney Transplantation Process: A Registry-Based Study in Sweden

Increasing evidence suggests that a low or high socioeconomic status (SES) correlates with waitlisting and kidney transplantation. In this study, Zhang et al aim to investigate the association between predialysis income, education, and access to (a) the kidney waitlist, and (b) kidney transplantation. Data were extracted from the Swedish Renal Register. Interestingly, even though 80% of all listed patients were eventually transplanted, the authors found disadvantages for patients of with a lower SES. Income and education appear to play a complex role and are key contributors in accessing kidney transplant waitlists in Sweden.

Are you involved in managing challenging transplant cases? If yes, the Scientific Program Committee of the TTS 2018 congress in Madrid is inviting you to submit the most challenging case you were involved with.

March 14 - ROME - Associated Press - Chinese health authorities told a Vatican trafficking conference that Beijing's efforts to crack down on illegal "underground" organ transplants have resulted in 220 arrests and 100 victims being rescued over the past 10 years. Dr. Haibo Wang, deputy chief of China’s organ donation and transplant foundation, provided the data as part of China’s yearslong effort to convince the international medical community that it no longer harvests organs from executed prisoners.

March 12 - From 2005 to 2015, there was a decrease in living kidney donation in men, while donation was stable for women, according to a study published online in the Journal of the American Society of Nephrology.

March 9 - U.K. Researchers are using stem cells to develop a "patch" that could help mend diseased and damaged hearts, eliminating the need for a transplant.

March 8 - Biophysicists in Russia have gained greater understanding about the structure of nanofibrous scaffolds – termed nanoscaffolds – in a study that is researching heart tissue regeneration.

March 12 - At two years of follow-up, severely ill patients with advanced heart failure who received a novel heart pump fully implantable within the chest experienced no malfunctions requiring replacement or removal of the device for blood clotting

March 9 - A Japanese team of physicians won approval Friday from an Osaka University panel for its plan to carry out the world’s first clinical study for treating heart failure with sheets of cardiac muscle cells created from so-called iPS cells.

It's a future that Martine Rothblatt, one of the region's most recognizable biotech CEOs, is working to make a reality at her company, Silver Spring's United Therapeutics Corp. — and she predicts this science fiction could start to become scientific fact in the next five years. Transforming organ transplantation ...

Symposium in Organ Transplantation in Children