During the recent TTS Council Retreat (March 23-24), held in Vancouver - Canada, the TTS Council agreed that the TTS 2018 Congress should be held earlier than originally planned to facilitate greater participation from European members.

The Congress will now be held from June 30 to July 5, 2018 at the IFEMA Congress Centre in Madrid, Spain.

Stay tuned for our congress website launch (to be announced in a future issue of the Tribune Pulse). 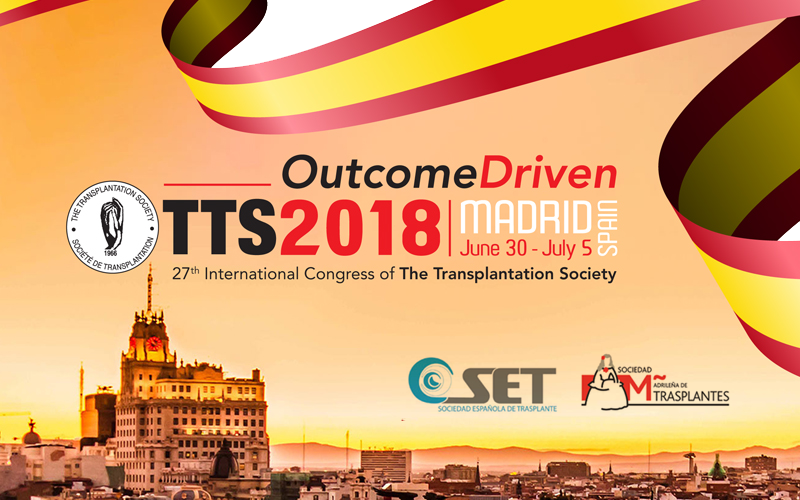 Your opinion is important to us! The Scientific Program Committee of TTS 2018 invites YOU to submit your ideas and recommendations for the program by April 24, 2017.

The SPC is looking for feedback in the following areas:

Keynote presentation topics should be applicable to a great majority of the audience and not focus on a niche topic. This year's program theme is OUTCOME DRIVEN. This theme would ideally be reflected in the presentation.

General presentation topic suggestions will be provided to the State-of-the-Art leads for the planning of SOTA sessions and Early-Morning Symposia.

Innovation. TTS 2018 is eager to highlight innovative presentations. You have the opportunity to propose a session / presentation that is novel. This implies that the topic is not currently listed as one of the SOTA topics and has never been part of a TTS meeting. It is assumed that you, as the submitter, would be the session organizer.

Although liver allocation was largely improved by adoption of Model for End-Stage Liver Disease (MELD) score in early 2000’s, the disparity between donor demand and supply always has been a concern in abdominal solid organ transplantation.15 Besides partial liver grafts from live donors, livers removed from patients with familial amyloid polyneuropathy undergoing liver transplantation (domino liver transplants) promoted a small increase in the donor pool. Utilization of liver allografts procured from non-heart beating donors [deceased after cardiac death donors (DCD donors)] has contributed to a considerable increase the donor pool in the United States and in some European Countries, currently providing outcomes that are nearly as good as those obtained by the use of livers from brain dead donors.16-17

Extensive portal vein (PV) thrombosis (Grade 3, complete thrombosis of both PV and proximal superior mesenteric (SMV) vein with open distal SMV; Grade 4, complete thrombosis of PV and proximal and distal SMV) is a relative contraindication to liver transplantation. For grade 3 PV thrombosis, whenever eversion thromboendovenectomy is not accomplished, interposition of a venous graft between SMV and PV of the liver allograft may be a feasible solution. For Grade 4 PV thrombosis, utilization of portomesenteric venous system of the recipient usually is not feasible. Anastomose PV to a collateral shunt, construct a renoportal bypass.19 arterialize PV,20 perform cavoportal hemitransposition21 and multivisceral transplantation22 are potential therapeutic options. Complications of renoportal bypass may include thrombosis, renal failure, and transient ascites. PV arteralization may be complicated by PV pseudoaneurysm. Among the available options for liver transplantation in the setting of Grade 4 PV thrombosis, multivisceral transplantation is the only procedure that completely reverses portal hypertension while addresses primary disease.22

Renal transplantation in the setting of complete inferior vena cava thrombosis also can be problematic. In such instances, a collateral venous branch utilized as the site of the renal vein venous anastomosis.23 Other suitable options for establishing venous outflow to renal allograft may include mesenteric veins and IVC.

(references are located at the bottom of this article)

About our guest editor

DR. Marcio F. Chedid obtained his Medical Doctor degree by the Federal University of Rio Grande do Sul (UFRGS) in Porto Alegre, Brazil in 2004. DR. CHEDID concluded a five-year General Surgery and Surgical Oncology Residency at Hospital de Clínicas de Porto Alegre - UFRGS in 2010. He obtained ECFMG certification and worked as a Clinical Fellow at the Division of Abdominal Transplantation Surgery of Mayo Clinic in Rochester, Minnesota USA, from 2011 to 2013. DR. Chedid also was a Visiting Scholar at the Department of Surgery of the Washington University in Saint Louis 2014.

DR. Chedid then returned to his home country Brazil to work as Attending Surgeon at the Division of Gastrointestinal Surgery and Liver and Pancreas Transplantation of Hospital de Clinicas de Porto Alegre (UFRGS), at his hometown Porto Alegre 2014. His current main activities are to perform transplants and hepatobiliary operations. He was the first surgeon to report on successful performance of human pancreas transplantation utilizing IGL-1 preservation solution (https://www.ncbi.nlm.nih.gov/pubmed/27163542).
As a former Professor of Human Anatomy, DR. Chedid co-edited a textbook about human anatomy of the abdomen - Anatomia Clínica e Cirúrgica do Abdome - that was published by the UFRGS university press. He has obtained a Ph.D. degree in Surgical Sciences and has authored/co-authored over 35 scientific articles in surgery and medicine. His main interest is researching ways of improving the outcomes of pancreas, liver and kidney transplantation. DR. CHEDID has worked as a reviewer for Transplantation journal, American Journal of Transplantation and also for Clinical Transplantation journal.

A 'Catch-22' of medical marijuana and organ transplants

April 3 - CNN- A rise in the use of medical marijuana has spurred a debate about organ transplantation, and it's changing some laws across the nation.
Read More

Mar. 31 - Nephrology News & Issues - Certain white blood cells play an important role in bringing BK polyomavirus under control after kidney transplantation. The results of a research group at the Department of Biomedicine at the University of Basel and University Hospital Basel could contribute to improving control of immunosuppression, avoiding transplant rejection and developing relevant vaccines.
Read More

Exploring the ethics of offering tax credits to organ donors

HAV Transmitted Via Organ Transplantation

April 6 - IDSE.net- Although unusual, a CDC epidemiological investigation found that hepatitis A virus (HAV) can be transmitted through solid-organ transplantation.
Read More

April 6 - Reuters- Scientists are getting closer to building life from scratch and technology pioneers are taking notice, with record sums moving into a field that could deliver novel drugs, materials, chemicals and even perfumes.
Read More