Participate in the DICG public consultation concerning the Declaration of Istanbul 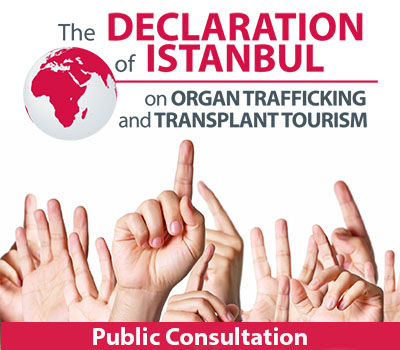 Click here to view the draft DOI and provide your feedback

Paul Teraski honored by the national inventors hall of fame

The Class of 2018 will be honored at "The Greatest Celebration of American Innovation," a two-day event held in Washington D.C.. In partnership with the United States Patent and Trademark Office (USPTO), NIHF will honor these Inductees May 2-3 at one of the innovation industry's most highly anticipated events — "The Greatest Celebration of American Innovation." 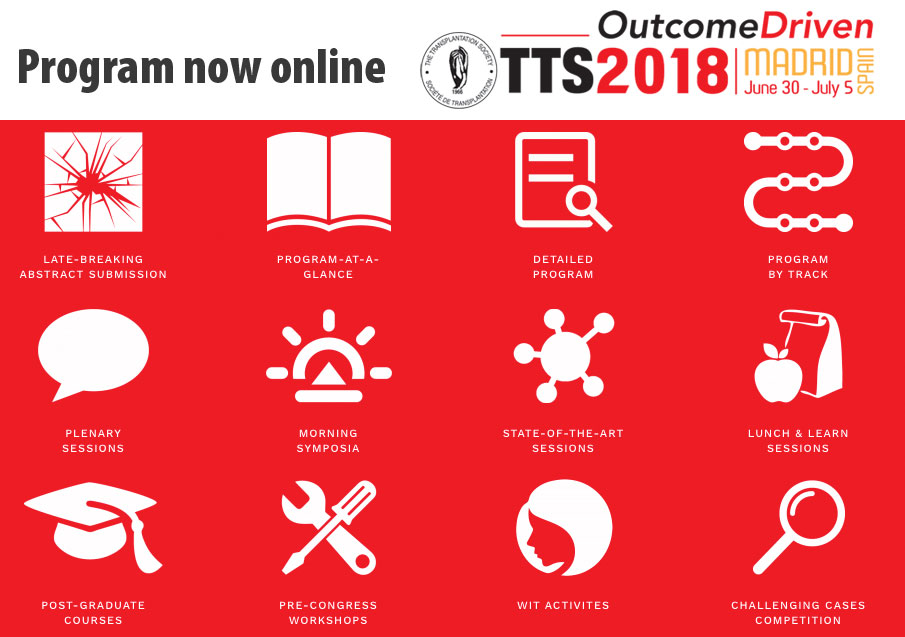 The full program is now available. Visit our website for full details and click on "Detailed Program" to read abstracts, look up speakers and more!

Are you involved in managing challenging transplant cases? If yes, the Scientific Program Committee of the TTS 2018 congress in Madrid is inviting you to submit the most challenging case you were involved with.

March 3 - The Sindh Institute of Urology and Transplantation (SIUT) on Friday opened its state-of-the-art Bashir Dawood Transplant Operating The­atre Complex equipped to carry out up to four transplant surgeries simultaneously.

March 6 - In a small study, doctors at Johns Hopkins have successfully transplanted 10 hepatitis C-infected kidneys into patients without hepatitis C and prevented the patients from becoming infected by hepatitis C. The success of these transplants could mean more organs being available for the nearly 100,000 people in the U.S. currently waiting for a kidney transplant.

February 28 - Scientists at the Diabetes Research Institute (DRI), University of Miami, have identified and characterized a population of progenitor cells located in defined areas of the human pancreas, which can be stimulated to develop into glucose-responsive beta cells.

March 1 - Newly identified stem cells in the lung that multiply rapidly after a pulmonary injury may offer an opportunity for innovative future treatments that harness the body's ability to regenerate.

March 2 - Researchers from the Murdoch Children's Research Institute (MCRI), University of Melbourne and Leiden University Medical Centre (LUMC) in The Netherlands have made an important step towards making human kidneys from stem cells that they one day hope can be used to treat kidney disease.

Drug saves lives of those on liver transplant list, in world-first treatment

March 3 - In a world-first, Melbourne's Austin Health has reapplied how the drug Terlipressin is given to patients waiting for a liver transplant, reducing the length of hospital stays and improving their post-surgery recovery.

March 6 - Surgeons and scientists at Baylor College of Medicine and the Texas Heart Institute will study the utility of previously unused organs to increase the number of heart transplantations, potentially making transplant possible for thousands of patients who die while waiting for an acceptable heart to become available.

Mar. 8, 2018 - The Japan News -The Yomiuri Shimbun A team of scientists says it has created a pig that can be used in transplantations in humans. According to the team, which includes researchers from Meiji University and Kyoto Prefectural University, the animal is the first to be developed for transplantation based on national guidelines ..

Researchers have learned a tremendous amount about how the human immunodeficiency virus (HIV), which causes AIDS, infects immune cells. Much of that information comes from studying immune cells in the bloodstream of HIV-positive people. Less detailed is the picture of how HIV interacts with immune cells inside the lymph nodes, where the virus can hide. In this image of lymph tissue taken from the neck of a person with uncontrolled HIV infection, you can see areas where HIV is replicating (red) amid a sea of immune cells (blue dots). Areas of greatest HIV replication are associated with a high density of a subtype of human CD4 T-cells (yellow circles) that have been found to be especially susceptible to HIV infection.

Symposium in Organ Transplantation in Children