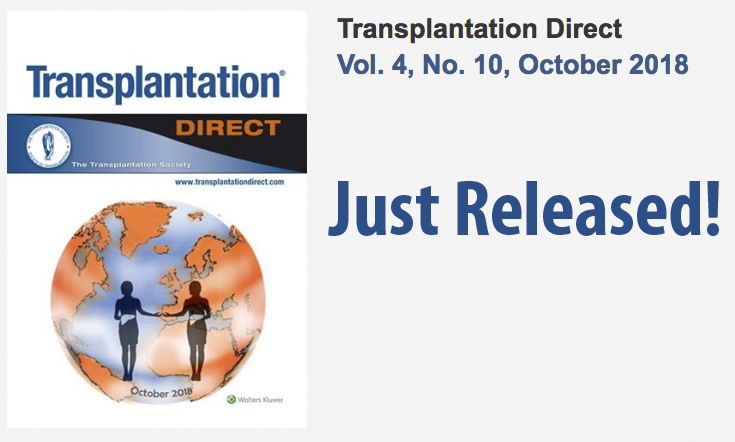 The October issue of Transplantation Direct delivers a variety of articles to peak your interest. In kidney transplantation, a number of issues related to organ suitability are investigated, including analyses of donor/recipient size matching, and the influence of donor age in cases of donation after circulatory death. A literature-based review of living kidney donor evaluation efficiency reveals promising opportunities to improve this process. Adherence to long-term immunosuppression and its relationship to kidney transplant histology are explored in detail. Predictive renal function tests for increased risk of cardiovascular events in kidney transplant recipients are investigated, and another article focuses on a predictive model for detecting hyperglycemia in nondiabetic recipients after liver transplantation. A first report on using hypothermic oxygenated machine perfusion to improve the quality of human pancreas grafts is also featured in this issue. In addition, we include publication of the 2018 islet and pancreas transplant report from the Australian and New Zealand group. Enjoy these and other aspects of the October Transplantation Direct issue!.

The EXTENDED deadline to submit an application to the ISN - TTS Sister Transplant Centers Program is October 5, 2018 (for 2019).

Read more on th program and get some useful tips

Pediatric en-bloc kidneys are not accepted by all centers for the transplantation into adults. There is limited data on extended long-term outcomes of these allografts. In a previous study, the authors had retrospectively compared the outcomes of pediatric en-bloc versus living donor kidney transplantation into adults at their center and identified inferior 1 year graft survival, but comparable 5-year graft survival and improved function up to 8 years following transplantation in en-bloc kidney recipients. In this retrospective review, the authors report on long-term outcomes of this cohort.
72 pediatric en-bloc and 75 living donor kidney transplants were transplanted between 1990 and 2001; immunosuppression was similar in both groups and included cyclosporine, azathioprine and prednisone prior to 1996 and cyclosporine, mycophenolate mofetil and prednisone for transplants between 1996 and 2001. Pediatric donors were 16.9 ± 11.2 months old and weighed 10.7 ± 3.8 kg with terminal serum creatinine of 0.50 ± 0.45 mg/dL. Living donors were 40.1 ± 9.4 years old and serum creatinine was 0.90 ± 0.16 mg/dL at the time of donation. Delayed graft function was more frequent in pediatric en-bloc kidneys (26.4% vs 6.7%, P = 0.001). Kaplan-Meier estimate revealed similar graft survival between the groups up to 27 years of follow up (log rank P = 0.78). Estimated glomerular filtration rates were consistently higher in pediatric en bloc kidney recipients from years 5 through 17 posttransplantation.
The study demonstrated that pediatric en-bloc kidneys confer long-term graft survival rates comparable to living donor kidneys and along with superior graft function, supporting the utilization of these allografts which may help alleviate the waiting list burden.

The Young Members Committee is seeking active TTS members from Asia-Pac, Middle East, Africa and Latin America who want to take an active role in representing their regions.

A reporter wrote an article on the illicit trade in human organs. Now people from all over the world email me trying to sell their kidneys 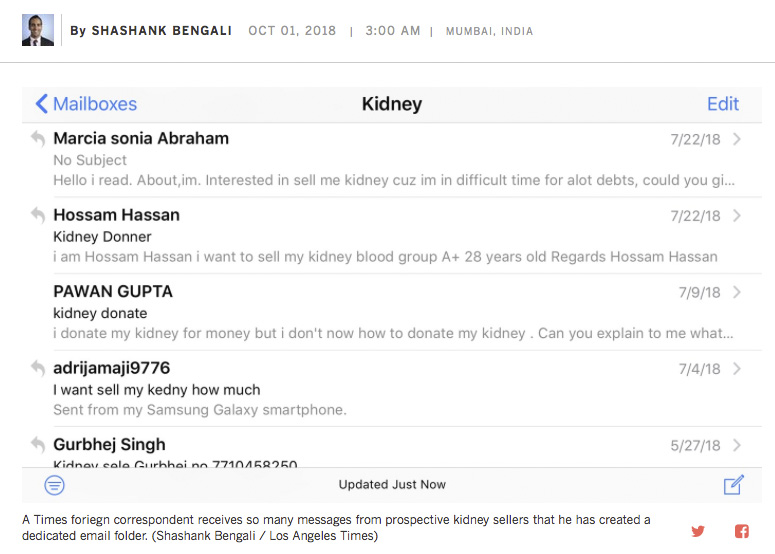 October 1 - As a foreign correspondent, I was accustomed to seeking out people in difficult circumstances. Now they were seeking me out, showing up in my email at all hours — when I was writing another story, racing to catch a flight, having dinner with my wife at home in Mumbai or trying to rock one of our newborn twins to sleep — and becoming impossible to ignore..

Professor Park Byung-joon and his team at Chung-Ang University Hospital’s Department of Thoracic and Cardiovascular Surgery announced on Thursday the successful surgery results of transplanting a 3D-printed ribcage to a patient with sarcoma, a malignant tumor that invaded the thorax.

September 28 - A substantial proportion of pediatric liver transplant patients with normal liver tests have varying degrees of subclinical chronic allograft injury, according to new findings. For the study, Dr. Sandy Feng of University of California, San Francisco, and her colleagues used data collected for iWITH, an immunosuppression-withdrawal trial that included 157 stable long-term recipients of liver transplants from living or deceased donors (45% boys).

September 27 - COPD is associated with reduced physical activity, an increased risk for pulmonary infections, and impaired survival in nontransplant patients. The aim of this study was to investigate the influence of COPD in patients after heart transplantation (HTX).

Clear up this stem-cell mess

October 4 - Johannesburg- In what is believed to be the first in the world, researchers at Wits University have transplanted a liver from an HIV positive mother to her HIV negative child.

Would you rather die of liver failure or live with HIV?

October 4 - This was the ethical dilemma faced by doctors at Wits Donald Gordon Medical Centre to save a child's life.