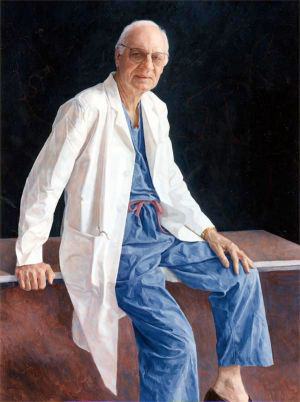 The International Xenotransplantation Association has developed the Keith Reemtsma Lecture Endowment Fund to enable an eminent scientist who has contributed to the field of xenotransplantation to share his or her research findings at the biennial IXA Congress. The Endowed lectureship will pay travel costs for the invited speaker to attend the IXA Congress.

Donors can choose an individual donation amount or choose from one of the amounts listed. Charitable tax receipts issued in US dollars will be issued to all donors at the end of the tax year. All donations are tax-deductible to the full extent of the law; for donors outside of North America please consult with your tax advisor regarding specific questions about your deductions.

The IXA is also able to accept donations of stocks or securities, for more information on this type of donation please contact sections@tts.org.

The lectureship will honor the memory of Dr. Keith Reemtsma. Dr. Reemtsma pioneered clinical xenotransplantation in 1963, transplanting kidneys from chimpanzees and a rhesus macaque to patients with renal failure. His later work focused on xeno islets. A founding member and Honorary Founding President of IXA, he collaborated with the other pioneers in the field, and either trained or encouraged the generations of scientists and surgeons who followed in their footsteps. In addition to his many scientific accomplishments, his vision, humility, wisdom, and wit live on through the life and work of all who knew him. This lectureship will serve as an enduring vehicle through which he can inspire future generations.

IXA expects to endow this lectureship through fundraising from IXA and TTS members, and from Dr. Reemtsma’s friends and colleagues around the world. The lecture will honor an eminent scientist, recognizing her or his contribution to the field of xenotransplantation, and will be delivered at IXA’s biennial Congress. The inaugural Reemtsma Lecture will be given at the IPITA-IXA-CTS Joint meeting in Melbourne, Australia, November 15-19, 2015. When and as circumstances allow the IXA Reemtsma Lectureship Fund’s endowment will also support an additional lecture in conjunction with TTS’s biennial meeting, which is held in alternate years to IXA.