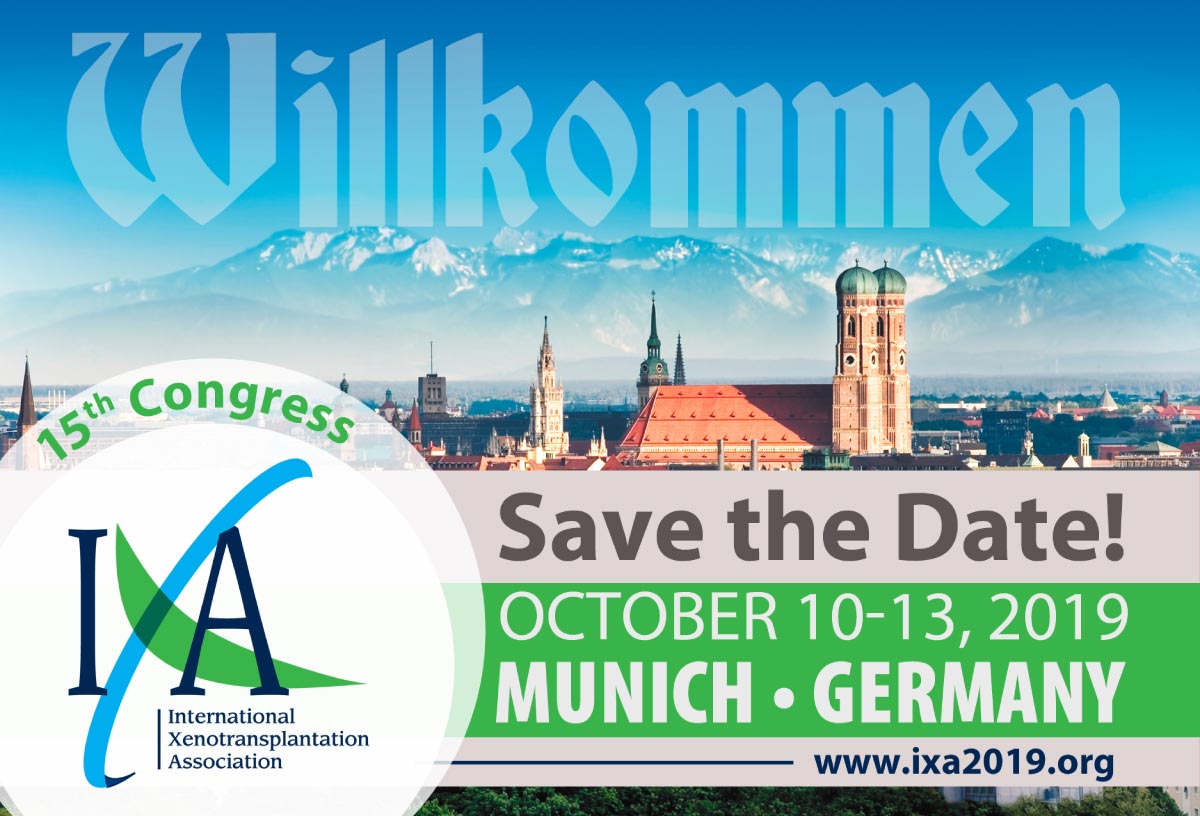 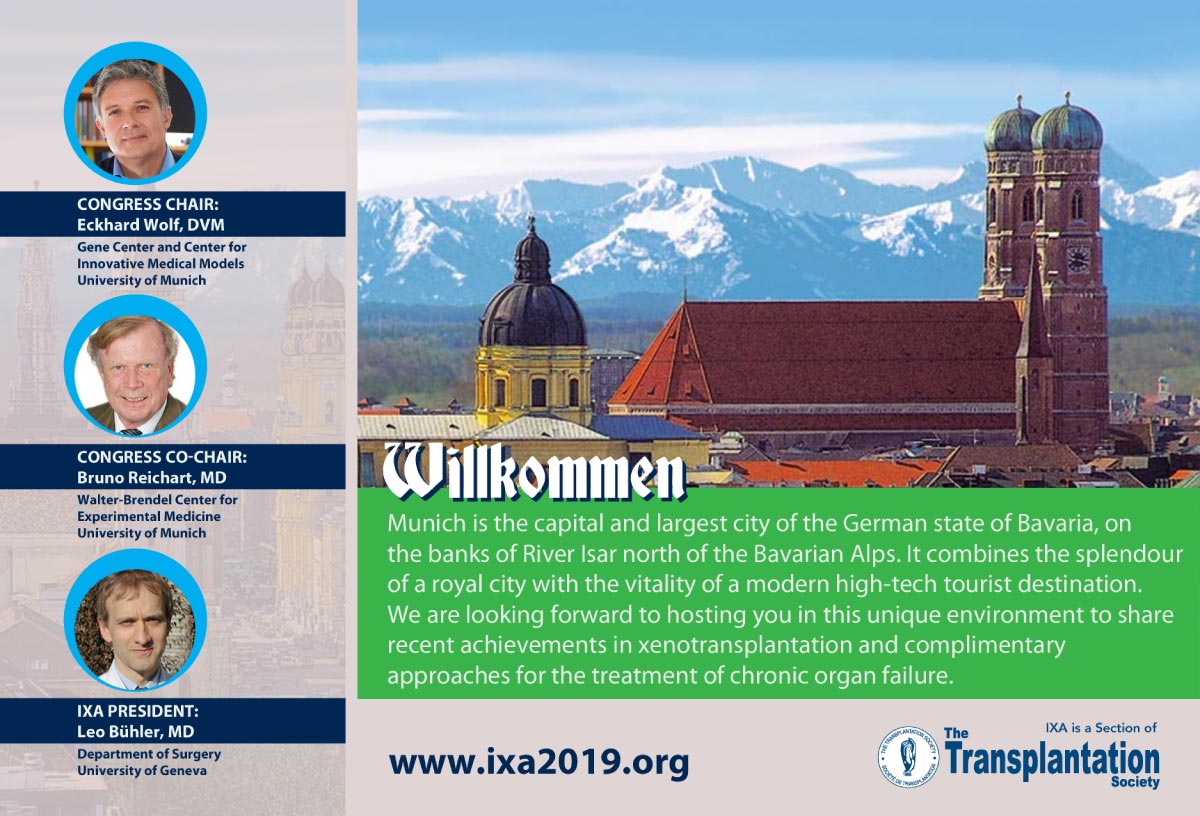 This year marks the 20th anniversary of the founding of the International Xenotransplantation Association. Our 14th biennial Congress, recently held in Baltimore, Maryland, demonstrated the growth and energy within the Association. The meeting brought together a dynamic, influential group of scientists and clinicians whose work will help to set the future of new clinical treatments with the potential to transform modern medicine.

Satellite meetings designed to foster discussion on hot topics saw the participation of a broader audience. The Hyperimmunized/iABO Symposium brought together clinicians and surgeons who are active in the management of sensitized patients as well as those conducting related cutting-edge clinical trials. The Swine in Biomedical Research Conference focused on scientific as well as organizational aspects of generating swine and advancing relevant animal models for biomedical applications, with the participation of entrepreneurs and industry partners.

The FDA/IXA Symposium continued the ongoing dialogue between the xenotransplantation scientific community and the agencies that oversee the regulatory aspects of medical therapies in US. Recent scientific advances and challenges of risk/benefit were discussed in a positive and constructive way. The IXA-Theological Symposium took place to address ethical issues on xenotransplantation from the prospective of three religions (Christianity, Judaism, and Islam). Scientists and clinicians had the opportunity to interact with theologians on the moral duties and responsibilities of conducting novel biomedical research. The ethical groundwork discussed here, no less than the regulatory meetings with the FDA, will become even more prominent as we develop strategies and models that bring xenotransplantation closer to the clinic.

Participation in the combined meetings by these clinicians, scientists, and veterinarians, and their scientific and clinical teams, exposes the benefits of xenotransplantation to a broader group and justifies corporate sponsorship beyond those companies engaged directly in xenotransplantation.

The Congress, chaired by Dr. Richard N. Pierson III, touched on a variety of topics of interest to our members. There were many highpoints, including the touching remembrance by friends and colleagues of the late Dr. David White, whom we honored for his life and significant contributions to the field of xenotransplantation. Honorary membership was awarded to Dr. Megan Sykes in recognition of her long time commitment and major contributions to xenotransplantation. Recipients of this year’s TTS-IXA Scientific Awards were announced. We also welcomed new members to the IXA Council. Opening our doors to be even more inclusive and welcoming, sessions were presented for Women in Transplantation and Young Investigators. We look forward to the energy provided by the young investigators, who were well represented in all sessions, as well as that of our new councilors, to keep the IXA moving toward a bright future.

Under the guidance of Dr. Leo Buhler, our journal, Xenotransplantation, has shown a rising impact factor (3.9), highlighting the importance and interest in our work.
We look forward to the 2018 TTS meeting in Madrid and our next IXA meeting, which will be held in Munich on October 10-13, 2019 (see preview). Even in these times of instant virtual communication, the personal interactions and associations developed at the IXA Congress can be very meaningful and rewarding. Please consider joining us there.
These are truly exciting times to be part of the IXA. All those who have an interest in xenotransplantation are encouraged to become active members of the IXA.

The University of Maryland, Baltimore (UMB), founded in 1807 along a ridge in what was then called Baltimore Town, was chartered by the State Legislature as a medical school, the nation’s fifth, and the first public School of Medicine. Iconic Davidge Hall (pictured below) opened its doors to medical students in 1813. Today, this 71-acre research and technology complex encompasses 68 buildings in West Baltimore near the Inner Harbor. UMB is the University System of Maryland's professional graduate campus, whose six professional schools and affiliated Graduate School train the majority of the state's physicians, graduate nurses, dentists, lawyers, social workers, and pharmacists. Under the leadership of President Jay A. Perman, MD, the University is a leading partner in the redevelopment of Baltimore’s Westside. The University of Maryland BioPark, which opened in October 2005, promotes collaborative research opportunities and bioscience innovation. Sponsored research totalled $500.9 million in fiscal year 2014. With 6,276 students and 7,375 faculty members and staff, the University is an economic engine that returns more than $15 in economic activity for every $1 of state general funds appropriation. The University community gives more than 2 million hours a year in service to the public.

Islet Xenotransplantation Program at the University of Minnesota
Team of Christopher Burlak, Ph.D. at the Schulze Diabetes Institute 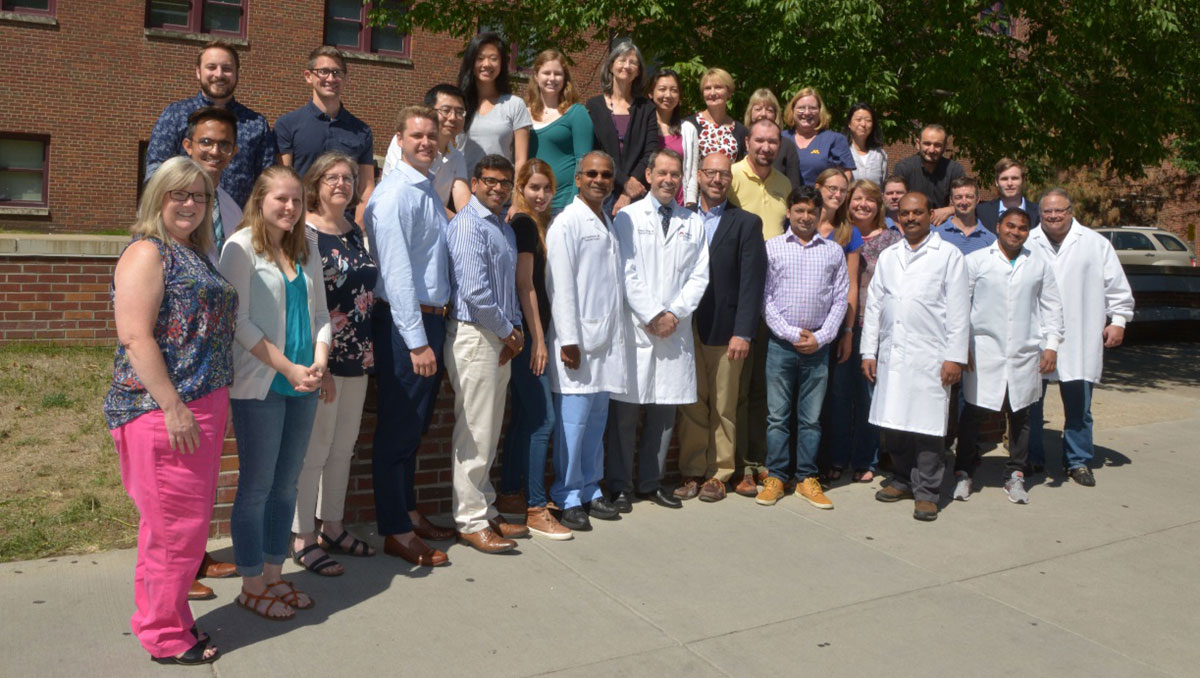 Projects in my group range from genetic engineering of donor pigs to the immunology of xenotransplantation in non-human primates. Our labs at the Schulze Diabetes Institute are located on the beautiful east bank of the Mississippi river. Later this year, a new cGMP facility, dedicated to the manufacture of genetically engineered xenogeneic embryos and cell transplant products will become fully operational. Additionally, newly renovated adjacent laboratory space will accommodate several new postdocs and staff for ongoing projects funded by NIH, JDRF, DRWF, and industry partners.

The genetic engineering of donor pigs has become possible through a long-standing and highly successful collaboration with Drs. Randy Prather and Eric Walters at the National Swine Research and Resource Center. Our teams have generated gene knockout and transgenic pigs and are currently engaged in xenotransplantation studies using mice and nonhuman primates as recipients. The tools for manipulating DNA seem to change every other month and we have taken full advantage of the current technological landscape. Our genetic engineering effort has been focused on creating the minimum number of modifications to a porcine islet donor. After thorough investigation of numerous pig to primate xenotransplantation experiments we focused on reducing NHP antibody binding at the early stages of transplantation through deletion of genes that produce xenoantigens and possibly inclusion of genes that influence the adaptive immune response. Our most recent efforts have produced genetically engineered pigs in just 2 weeks longer than porcine gestation, roughly 4.5 months total. Those pigs are now 1 year old and will become an important part of upcoming experiments.

Working with Dr. Christopher Faulk (Department of Animal Sciences, University of Minnesota) and Dr. Moshe Szyf (Department of Pharmacology and Therapeutics, McGill University) we have designed and optimized a new technique for monitoring islet beta cell destruction after islet transplantation. The work soon to be completed focuses on a highly sensitive technique for measuring the release of durable beta cell specific components into the blood. Through routine blood draws, an islet transplant recipient patient can be monitored monthly for changes in the target molecules for the very earliest signs of rejection. This new assay would allow clinicians to adjust immunosuppressive regimens and also to advance immunologic tolerance of transplanted islets.

We also have two discovery science projects. The first project is a collaboration with Dr. Parastoo Azadi at the Complex Carbohydrate Research Center, where we have analyzed the N-linked and O-linked glycan profiles of human and porcine islets. Our earlier publications have paved the way for a deeper and more thorough investigation into glycan phenotypes among genetically engineered pigs and this new project has provided a clearer picture of what antigens are present as well as the larger scale effect of gene editing on glycosylation enzymes and glycan phenotypes. The second discovery project explores the mRNA expression profiles of samples of porcine islets from highly successful and rejected xenotransplantation experiments. High-coverage RNAseq analysis of islet and pancreas samples has revealed very clear immunologic associations between groups and while this data set is quite new, we are encouraged by the very positive early findings.

We appreciate the opportunity to share with the xenotransplant community a brief description of team, laboratories and some of our projects. We are actively seeking well-rounded postdoctoral fellows in the fields of genetic engineering and informatics and welcome communication from anyone who shares our passion of advancing xenotransplantation into a viable and superior treatment for patients burdened by diabetes.

A. The proceedings in clinical trials of corneal xenotransplantation in South Korea

B. Joint FDA-IXA symposium during the IXA Congress, Baltimore, September 20-23, 2017

Following discussions between FDA representatives and the IXA Council, in Boston during the 2016 American Transplant Congress, IXA and FDA organized a joint Symposium during the recent 14th IXA Congress in Baltimore. This half-day symposium, attended by over 250 people, was divided in three sessions:

In the second session, infectious challenges were reviewed by Jay Fishman (lessons from the allotransplant experience), Henk Schuurman (infectious agents and source pigs), Jay Fishman (modified pigs and PERV), and Ralf Tönjes (methods for PERV detection). This session ended with a presentation by David Sachs on the risk-benefit of a xenotransplantation product.

In the third session, regulatory considerations were presented by colleagues from FDA. Judith Arcidiacono gave an introduction and overview including a list of regulatory documents, and this was followed by John Dennis (source animal herds and characterization), Harlan J Howard (regulation of intentionally-altered genomic DNA), Allen Wensky (preclinical considerations), and Bruce Schneider (clinical trials).

All presentations were quite informative and were followed by a lively discussion. Major points raised were the need for pigs expressing regulatory factors of the human complement system and coagulation, in case that new modifications eradicate the possibility of antibody-mediated rejection: this point is relevant but an unequivocal answer is not yet possible. Also the recent publication of live PERV-C-negative piglets in which genes encoding PERV-A and PERV-B are inactivated, raised the question whether such pigs are required for entering clinical trials: this was not considered necessary for first generation xenotransplantation products, but could be considered for a second generation product, if necessary. There was also time to discuss some relevant logistical items, such as transport of designated pathogen-free pigs, housing of multiple genetically modified pig breeds in one facility, and the use of cloned pigs as xenotransplant donors. Also the question was raised whether a multi-transgene product will be considered as one or as multiple drugs in regulatory review. Colleagues from the FDA could not give an unequivocal answer, but mentioned that these aspects will be considered on a case-by-case basis. FDA will accept drugs in Investigational New Drug applications that have not yet received regulatory approval, if proper pharmacology and toxicology data are provided. Also, FDA colleagues mentioned that there is no requirement for a specific species for in vivo testing of a xenotransplantation product, but expect a clear science-based rationale in the selection of a particular species.

In conclusion, this joint symposium was quite successful in presenting the views of the scientific field and the regulatory environment. This topic is relevant today since for a number of xenotransplantation products the entry into clinical trials is on the nearby horizon. IXA members were enthusiastic seeing active interest from representatives from regulatory agencies, not only during the joint symposium, but also at other events during the Congress. This facilitates a good and direct communication, which is needed for the advancement of xenotransplantation to the clinic.

Below is a list of the top 10 downloaded articles in first semester of 2017 in Xenotransplantation.

The 2016 Xeno-Prize was judged recently and we are pleased to announce that the winner is Dr. Lars Burdorf for his paper entitled: “Platelet sequestration and activation during GalTKO.hCD46 pig lung perfusion by human blood is primarily mediated by GPIb, GPIIb/IIIa, and von Willebrand Factor”. Congratulations to Dr. Lars Burdorf and Dr. Andrea Riner (first co-authors) for their outstanding work.

We are proud to announce that the new Impact Factor for our journal is now 3,961, i.e. two points higher than last year. This increase is clearly related to the quality of the submitted papers, i.e. your contributions to the field. We are confident that the development of xenotransplantation and its clinical application will continue to strengthen the interest for the journal. As IXA members, we would ask you to regularly submit articles to the journal and to encourage others to do so. Among the recent innovations, the journal can now be followed on your smartphone by downloading the App “Xen Journal”.
We thank you for your support,