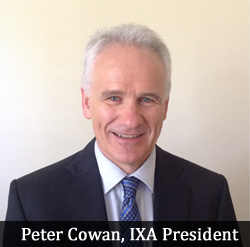 The TTS Congress held recently in Hong Kong highlighted the progress that is being made in our field, with a plenary on CRISPR/Cas9, State-of-the-Art talks on progress in gene modification, solid organ and islet xenotransplantation, and several oral and poster sessions. Many of the sessions are now available to view on the TTS website, free for TTS members and those who attended the Congress. Several groups around the world are now pushing ahead towards clinical application. While in Hong Kong, I attended a meeting of TTS Council and Section Presidents, at which we discussed the challenges ahead in these times of diminishing support from big pharma. Consensus was reached on a rolling 2-year Services and Support Agreement between TTS and the Sections, which will continue to provide IXA with the administrative and technical support that we require, particularly the invaluable services of Sections Manager, Sondra Livingston. I wish you all a productive year, and look forward to seeing you in Baltimore in 2017.

On behalf of the Xenotransplantation journal and its editorial team, we are proud to announce that the new impact factor of the journal is now 3,789, i.e. one point higher than last year. This increase is clearly related to the quality of the submitted papers, and your ongoing contributions to the field. We are confident that the development of xenotransplantation and its clinical application will continue to strengthen the interest for the journal. As IXA members, we would ask you to regularly submit articles to the journal and to encourage others to do so. Among the recent innovations, the journal can now be followed on your smartphone by downloading the app “Xen Journal”. We thank you for your support.

IXA and the Federal Drug Administration

We would like to share with you the key points of a discussion that took place between your IXA Council and two FDA representatives in June 2016 in Boston during the American Transplant Congress.

Xenotransplantation research has made significant progress during the last couple of years in a variety of preclinical models, paving the way for xeno-based treatment methods that may soon make their way to the clinic. The IXA Council therefore opened a dialogue with the FDA, offering to make them aware of your scientific progress, and to seek their advice regarding regulatory issues that may arise in the US, and in other jurisdictions, as xenotransplantation moves towards clinical trials. This was only an information-sharing meeting.

Members of the IXA Council explained the bases for renewed enthusiasm about the near-term future of xenotransplantation and shared three specific concerns regarding existing FDA guidance on xenotransplantation. These issues were: 1) the risk that PERV will emerge as a human pathogen appears to be low, and deserves to be recalibrated in light of improving prospects for therapeutic efficacy of one or more xeno-based treatments; 2) the requirement to assure 50 years of secure archiving of donor and recipient materials represents a formidable and arguably extraordinary burden for a clinical trial sponsor; and 3) some ambiguity exists regarding how genetically engineered source pigs would be classified with respect to the regulatory approvals path.

FDA shares IXA’s core goal: to facilitate the transition of xenotransplantation to the clinic, as safely as possible, as soon as preclinical evidence supports doing so. The FDA representatives gave their individual opinions about the significant progress toward preclinical benchmarks and recommended that IXA provide a summary of the current ‘state of the art’ in those candidate xeno applications which appear closest to clinical application. That information will be reviewed within the FDA as the basis for making a decision regarding further official discussions with IXA and other interested parties, and regarding a possible recommendation to FDA and HHS leadership regarding revisiting xenotransplantation regulatory guidance.

Our meeting paved the way for further discussions and workshops. Importantly, we expect that future official interactions with FDA will include public consultative sessions open to all xenotransplantation researchers, potential sponsors, and other interested parties, in accordance with US regulatory policies and procedures. A joint workshop with FDA is being planned for the first day of the IXA Congress in Baltimore, MD, USA, for more information please visit www.ixa2017.org.

On behalf of the IXA Council we thank you all for your excellent work that triggered this discussion with the FDA.

The IXA Vanguard Committee provides a forum for students and junior faculty in the field to interact with future leaders in xenotransplantation and provide opportunities for professional development. Members of the Committee are tasked with representing the junior members of IXA and work to increase the awareness of research trends and techniques that can advance the field of xenotransplantation. The Committee has also created a group Facebook page (find this group by searching “International Xenotransplantation Association (IXA) Vanguard Committee”) and a Twitter account (“IXA Vanguard Cmttee”). The Committee is planning young investigator targeted activities for the upcoming 2017 IXA Congress including a young investigator organized oral session that will be followed by a social event and opportunity to network with peers.

The 2015 Xeno-Prize was judged recently and we are pleased to announce that the winner is Dr. Leela Paris for her paper entitled: “Reduced human platelet uptake by pig livers deficient in the asialoglycoprotein receptor 1 protein”. Congratulations to Dr. Paris and her co-authors for their outstanding work.

Our “Pierson/Azimzadeh Transplant Research Group” is located in the Department of Surgery at the University of Maryland School Of Medicine, which in turn is part of the University of Maryland Baltimore. Our major research focus relates to understanding and preventing mechanisms of graft rejection, with an emphasis on lung and liver xenotransplantation, and on evaluating immunomodulatory agents to induce immune tolerance to transplanted solid organs in translational models. The Maryland team is proud to have the opportunity and privilege to host the next IXA Congress, which will be held in Baltimore, Maryland, September 20-23, 2017. 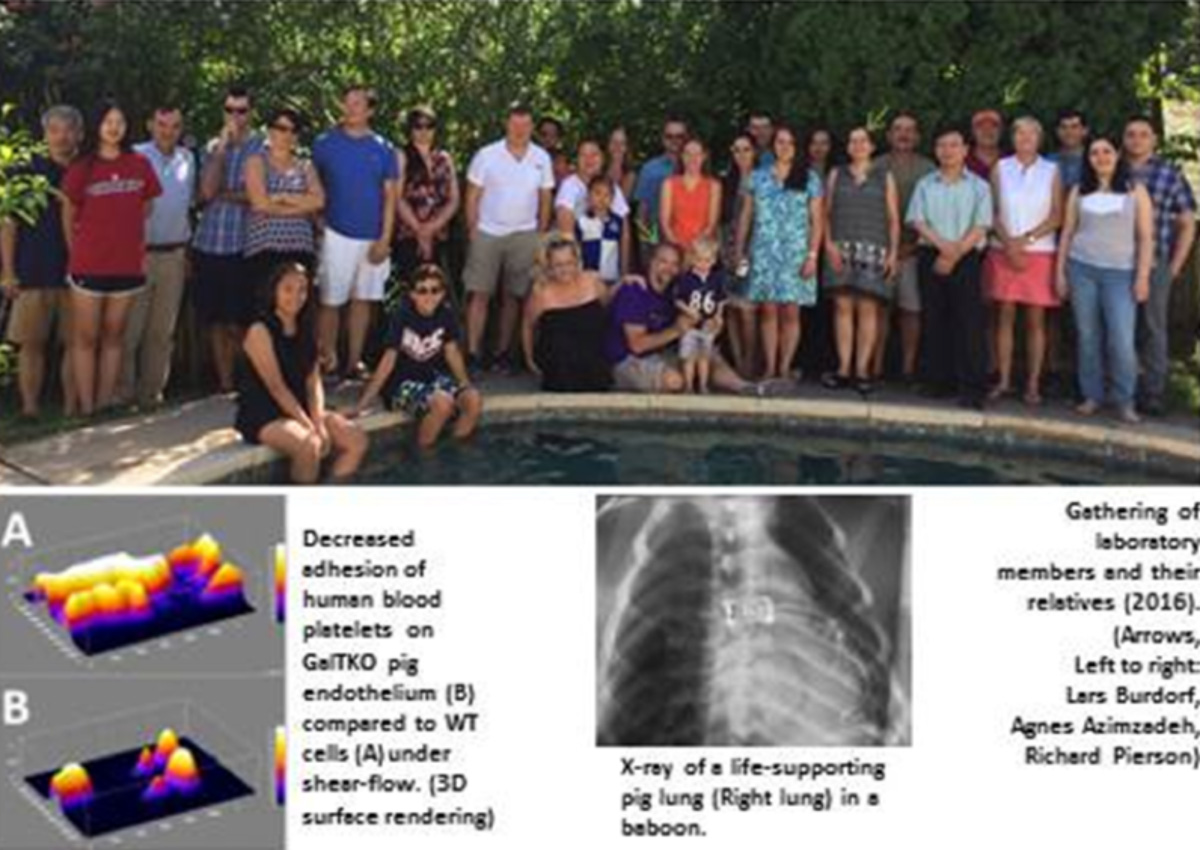 Agnes M. Azimzadeh, PhD, started in the xenotransplantation field after completing her doctoral work on antibody affinity characterization with Dr. Van Regenmortel (University Louis Pasteur, France). Her initial xeno studies with Pr. Philippe Wolf focused on xenoreactive antibody absorption, and the role of tissue-specific antibodies in activating complement and coagulation. In close collaboration with Dr. Ignacio Anegon and Pr. Jean-Paul Soulillou she also evaluated the effect of expressing a human complement regulatory protein (hDAF) in transgenic rats. These studies provided a proof-of-principle that genetic modifications of the donor organ can effectively control xenogeneic injury in primates. As coagulation pathway dysregulation then appeared as an additional major barrier, pig kidneys lacking von Willebrand factor were evaluated in collaboration with Pr. Jean-Pierre Cazenave and his team. In 1999, she joined Dr. Pierson’s research team to study xenotransplantation of the lung and other organs, and costimulation pathway blockade in allo and xeno translational models. Our team moved from Vanderbilt University, Nashville, TN, to University of Maryland in Baltimore, MD in 2002.

In the last decade, the Maryland team’s research showed that targeting anti-Gal antibodies and complement using soluble inhibitors or genetically modified (GalTKO, CD46, CD55) pig organs can prolong the survival and attenuate tissue injury of lung, heart and kidney xenografts. Recent studies have investigated the effects of additional genetic modifications to pig organs beyond GalTKO and expression of human complement regulatory proteins, such as expression of human thrombomodulin and endothelial protein C receptor to promote protein C activation, HLA-E to block NK cells, and deletion of Neu5Gc to remove an additional carbohydrate target of human-anti-pig xenoantibodies. Pharmacologic approaches targeting GPIb-vWF, selectins, integrins, leukotrienes, and sialic acid are also used to reveal the mechanisms of pig lung and liver injury in human blood perfusion and baboon organ xenograft models. Our xeno work is supported by an NIH grant in collaboration with David Cooper and his team (until recently at Pittsburgh, now transitioning to University of Alabama, Birmingham). A close long-term collaboration with Revivicor is supported by a sponsored research agreement from Lung Bioengineering LLC and United Therapeutics, and our xeno work is also supported by multiple other corporate partners and academic collaborations. Our allograft tolerance work is supported mainly by NIH within the NHP organ transplant tolerance consortium (Kristy Kraemer) and with the support of the Nonhuman Primate Research Reagent Resource (Keith Reimann).