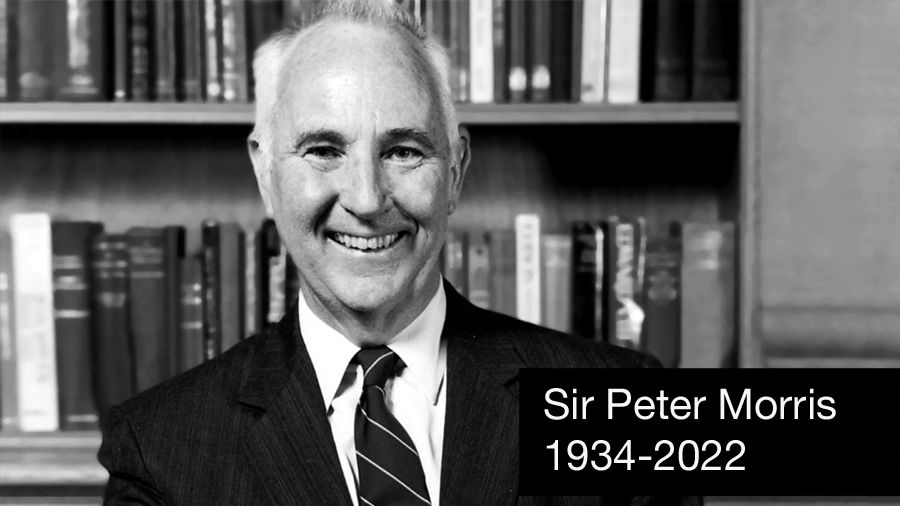 Peter Morris was born in Horsham, in the state of Victoria, Australia. He studied engineering at Melbourne University, before switching to study Medicine. He graduated in 1957 and married Jocelyn (Joce), also a doctor, 3 years later. While Peter was a young Surgical Registrar at St Vincent's Hospital in Melbourne, Dr Claude Welch from the Massachusetts General Hospital (MGH) came to St Vincent's as a Visiting Professor, this would prove to be important for his future surgical career. In order to gain additional clinical experience Peter and Joce came to work in the UK working their passage as a ships doctor on a cargo ship. Peter was as a surgical trainee at the Hammersmith Hospital in London before moving to Southampton as a registrar. Peter's interest in transplantation was probably initially triggered at the Hammersmith, as the first living unrelated kidney transplant was performed while he was there.

In 1964 Peter, Jocelyn and their first child moved to Boston.  It was as a result of assisting Dr Welch during surgery while he was in Melbourne that Peter was appointed as a surgical resident at the MGH where he also began his research career working with Dr Jack Burke investigating defence mechanisms in models of surgical infection.  Peter shared with confidents that he had never worked so hard as when he was a surgery resident at the MGH.  It was during this time that Peter met Tony Monaco (TTS President 1986-1988) who was working in Dr Paul Russell's laboratory just across the corridor.  Tony and his wife became life-long friends.

Peter and the family had originally planned to return to Melbourne, but the post he was to return to had been frozen due to a financial crisis at the university.  Instead, David Hume invited him to set up a tissue-typing laboratory at the Medical College of Virginia to support the developing transplant programme.   Here Peter became interested in the role of antibodies in transplantation.  Together with Paul Terasaki, he discovered that donor specific cytotoxic antibodies did develop after transplantation and that if they were present at the time of transplantation, they could trigger hyperacute rejection of the transplanted organ.

At the end of 1967 Peter did return to Melbourne as a transplant and vascular surgeon and set up the tissue typing and immunology laboratories.   Alan Ting joined Peter as his first graduate student to continue the study of the complex role antibodies play in transplantation.

Peter moved to Oxford with Joce and their five children in 1974 as Nuffield Professor of Surgery and Fellow of Balliol College.   Several of Peter's colleagues from Melbourne moved to Oxford with him including John Fabre, Peter's second graduate student in Melbourne, and Alan Ting.  Together they established a tissue typing laboratory and immunology research programme alongside the clinical transplant service.  Sir Peter Medawar opened the first dedicated transplant unit at the Churchill Hospital in Oxford in 1978.    The Oxford clinical and research programmes grew and soon attracted excellent clinical fellows and post-doctoral scientists as well as training numerous surgeon and physician scientists and immunologists, many of whom now run clinical and research programmes around the world.  Peter, together with his Oxford colleagues, was a prolific author publishing widely in the scientific and surgical literature.  His book, Kidney Transplantation is in its 8th edition, and he was the founding editor of the Oxford Textbook of Surgery.

Peter was a life-long supporter of The Transplantation Society.   He organised the Brighton Congress in 1982, was elected as TTS President 1984-1986 and awarded the Medawar Prize in 2006.  Peter served as an Editor of Transplantation from 1976 to 2014.

Peter was an accomplished sportsman representing Melbourne University at cricket, Australia at baseball and rather bizarrely, France at golf.  The annual cricket match against the Nuffield Department of Medicine was always a tense affair.    With his colleague Sir Roy Calne, also an excellent tennis player and Professor of Surgery at the University of Cambridge, the annual cricket and tennis matches were also much anticipated.

Peter was a guest on BBC Radio 4 Desert Island Discs in 2002.

He was elected as Fellow of the Royal Society in 1994, was a foundation fellow of the Academy of Medical Sciences in 1998 and President of the Royal College of Surgeons (RCS) England 2001-2004.  As Chairman of the RCS Research Board, he championed the Research Fellowship Scheme to facilitate the training of surgeon scientists.  He was awarded the Lister Prize for his contributions to surgical science in 2006.

Peter was knighted by Queen Elizabeth II in 1996 for services to Medicine and made a Companion of the Order of Australia in 2004.  He retired from the Nuffield chair in 2001, continuing to be active in the field developing The Transplant Library designed access to high quality, evidence-based information on all of aspects of solid organ transplantation.

Peter will be sadly missed by friends and colleagues in many parts of the world.

He is survived by his wife Joce and their children and families.

Visit the Sir Peter Morris page on our website 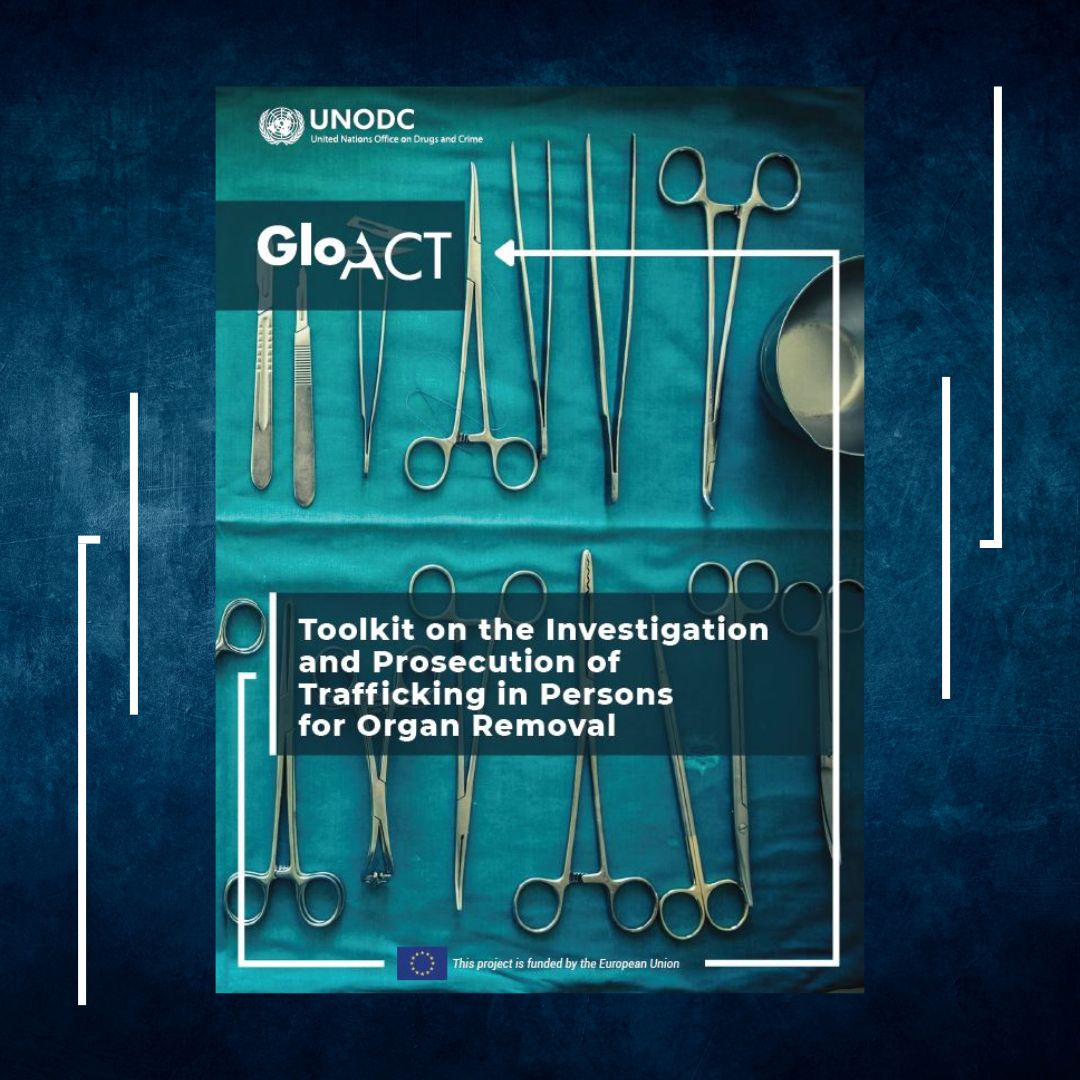 On Tuesday (Oct 25), the United Nations Office on Drugs and Crime (UNODC) launched a new Toolkit on the Investigation and Prosecution of Trafficking in Persons for Organ Removal, designed to encourage the proactive investigation of possible cases or red flag indicators. The toolkit focuses on organized criminal networks and the illicit financial flows stemming from them.

“For too long, trafficking for the removal of body organs has remained in the dark. Very few investigations exist, and even fewer prosecutions take place. The new UNODC toolkit will help train criminal justice professionals to identify victims and bring traffickers to justice,” said Amina Mohammed, United Nations Deputy Secretary-General, at the launch via video message.

TTS participated at the 2022 Mexican Society of Transplantation Congress! 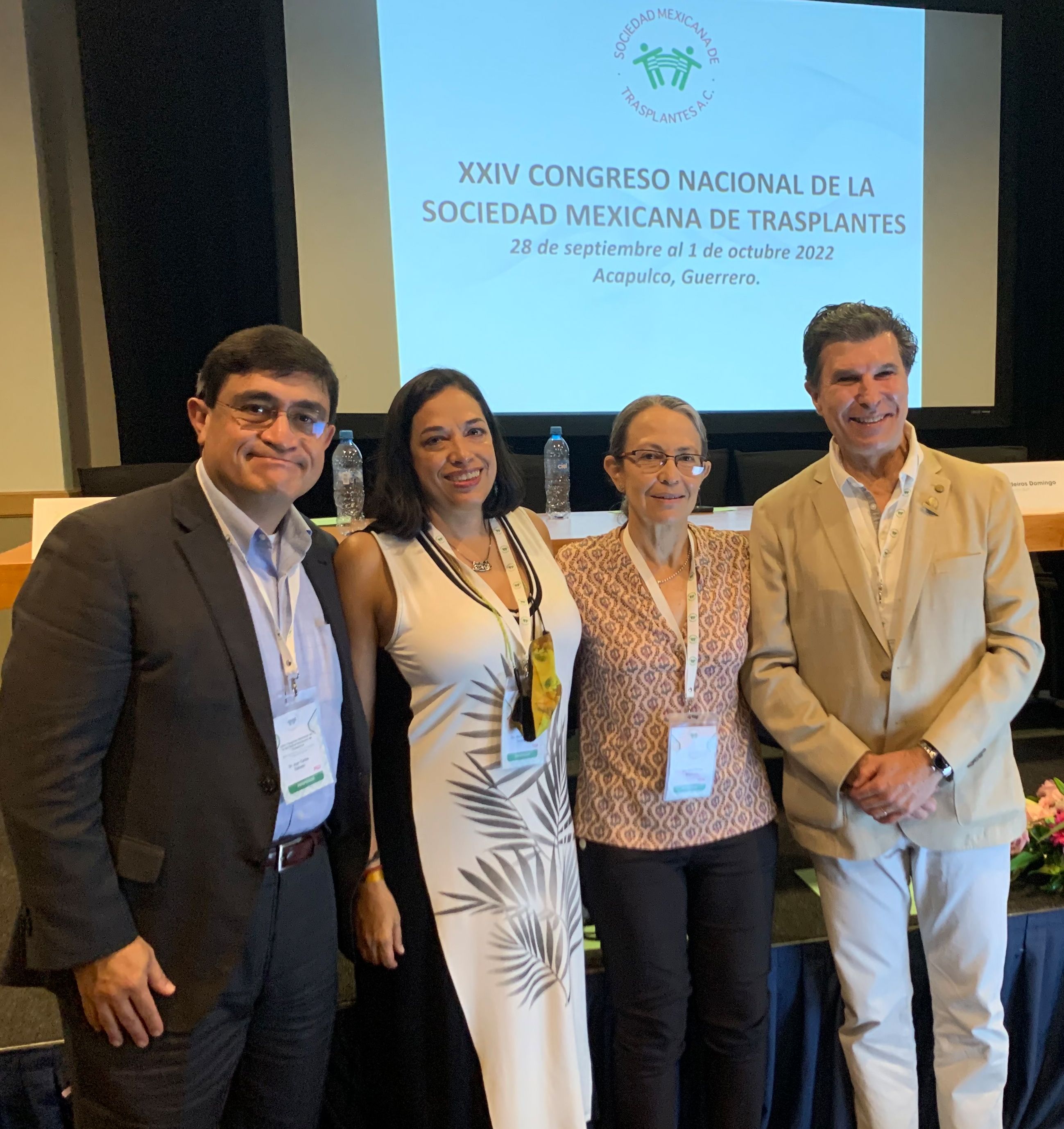 TTS was invited by the Mexican Society of Transplantation to participate in a round table that focused on “The role of transplantation societies to increase access to organ transplantation». at their recent congress which was held in Acapulco from Sept 28 - Oct 1, 2022.

Marcelo Cantarovich, our Immediate Past-President, represented TTS at the congress and participated in the round-table along with Mara Medeiros (President of the Mexican Society of Transplantation), Maria Amalia Matamoros (President of STALYC, Latin-American and Caribbean Society of Transplantation), and Juan Carlos Caicedo (Chair of the ASTS International Relations Committee).

The highlights of the round table included:

TTS @ Annual Conference of The Indian Society of Organ Transplantation 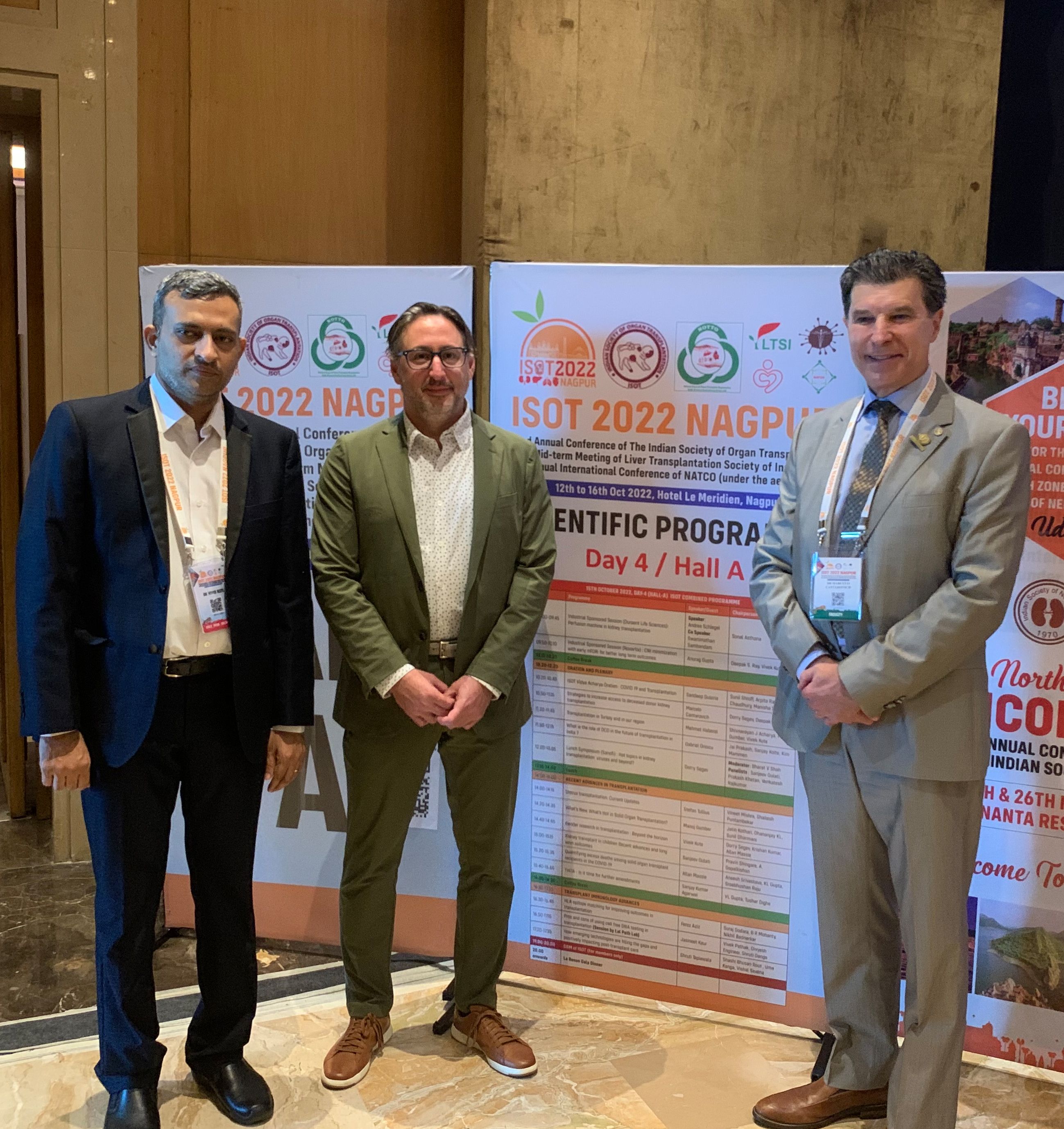 The program included presentations related to general topics in solid organ transplantation, COVID-19 and subjects related to increasing deceased donation, including donation after circulatory declaration of death. Of particular interest there was an one day session organized by Health authorities including The Directorate General of Health Services, National Organ & Tissue Transplant Organization, Ministry of Health and Family Welfare Government of India and The World Health Organization with the aim to increase access to ethical and affordable Transplantation. TTS is very supportive of the efforts towards increasing deceased donation in India. 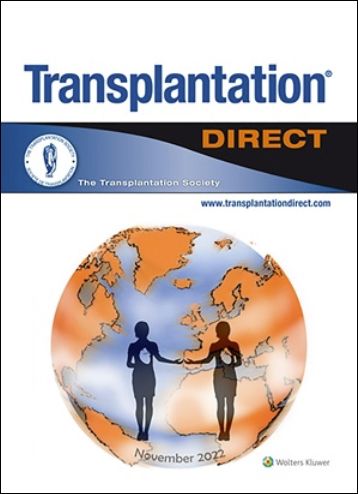 The November issue of Transplantation Direct is now on line, and offers intriguing articles on multiple topics. For updates on COVID-19 vaccination in kidney transplant recipients, there are four thought-provoking articles aimed to optimize strategies and outcomes. Also on the topic of kidney transplantation, the relationship of physical function to outcomes in older recipients and use of ex vivo normothermic machine perfusion in donors with acute kidney injury is examined, as well as using an A2 incompatible matching strategy to increase organ access for ABO group B and O recipients. In liver transplantation, DCD grafts for recipients with grade I-II portal vein thrombosis and outcomes in patients with postcapillary pulmonary hypertension is studied; we also have articles on predicting HCC waitlist progression before transplantation, questioning the need for using preservation solutions in living donor transplants, and testing dynamic DNA methylation as a mechanistic/biomarker in pediatric transplantation. On other topics, there is a review on how physical condition impacts health care and outcomes in lung transplantation - on testing machine perfusion for intestinal transplantation in pigs - and on the topic of organ donation with the unexpected frequency of orchialgia after living donor nephrectomy. Please visit our Transplantation Direct website for open access to all the details.
Table of Contents 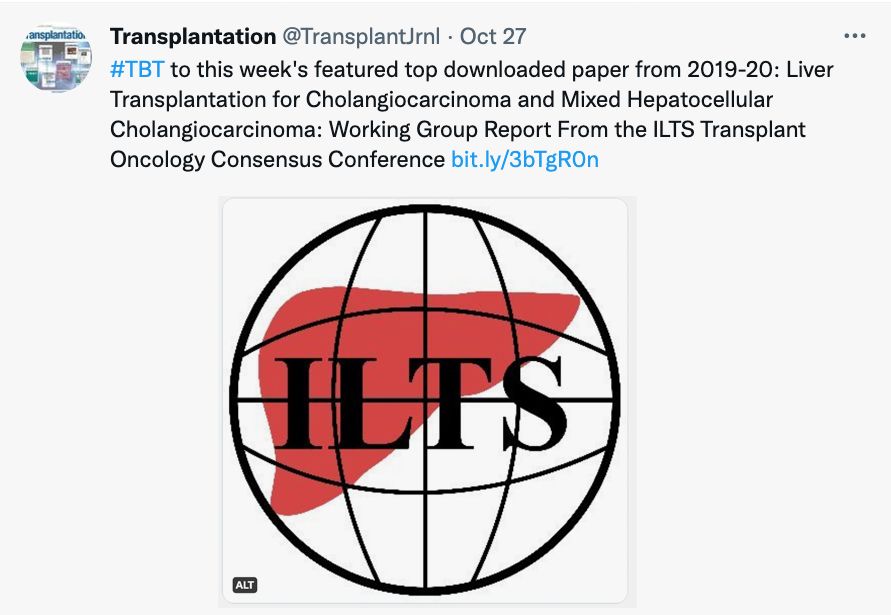 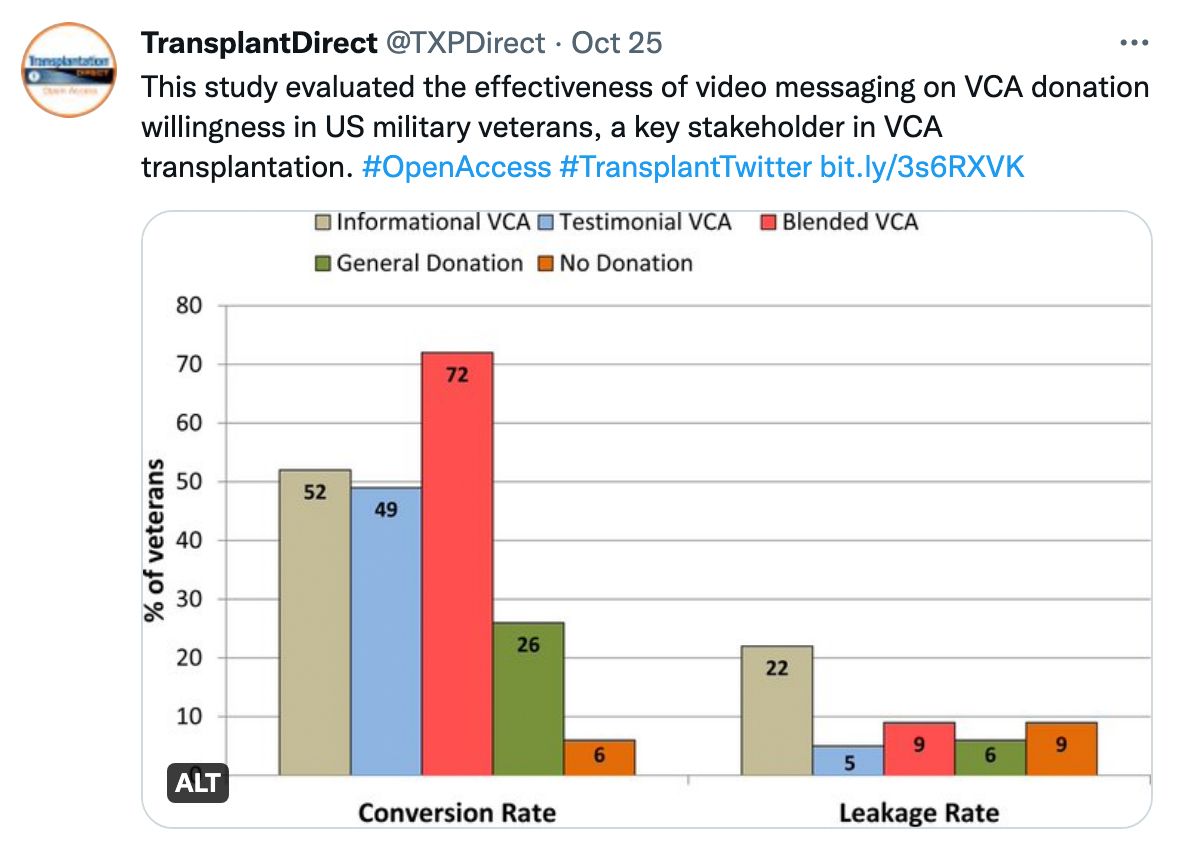 This study evaluated the effectiveness of video messaging on VCA donation willingness in US military veterans, a key stakeholder in VCA transplantation.
Read More

Open to all Transplant Professionals! 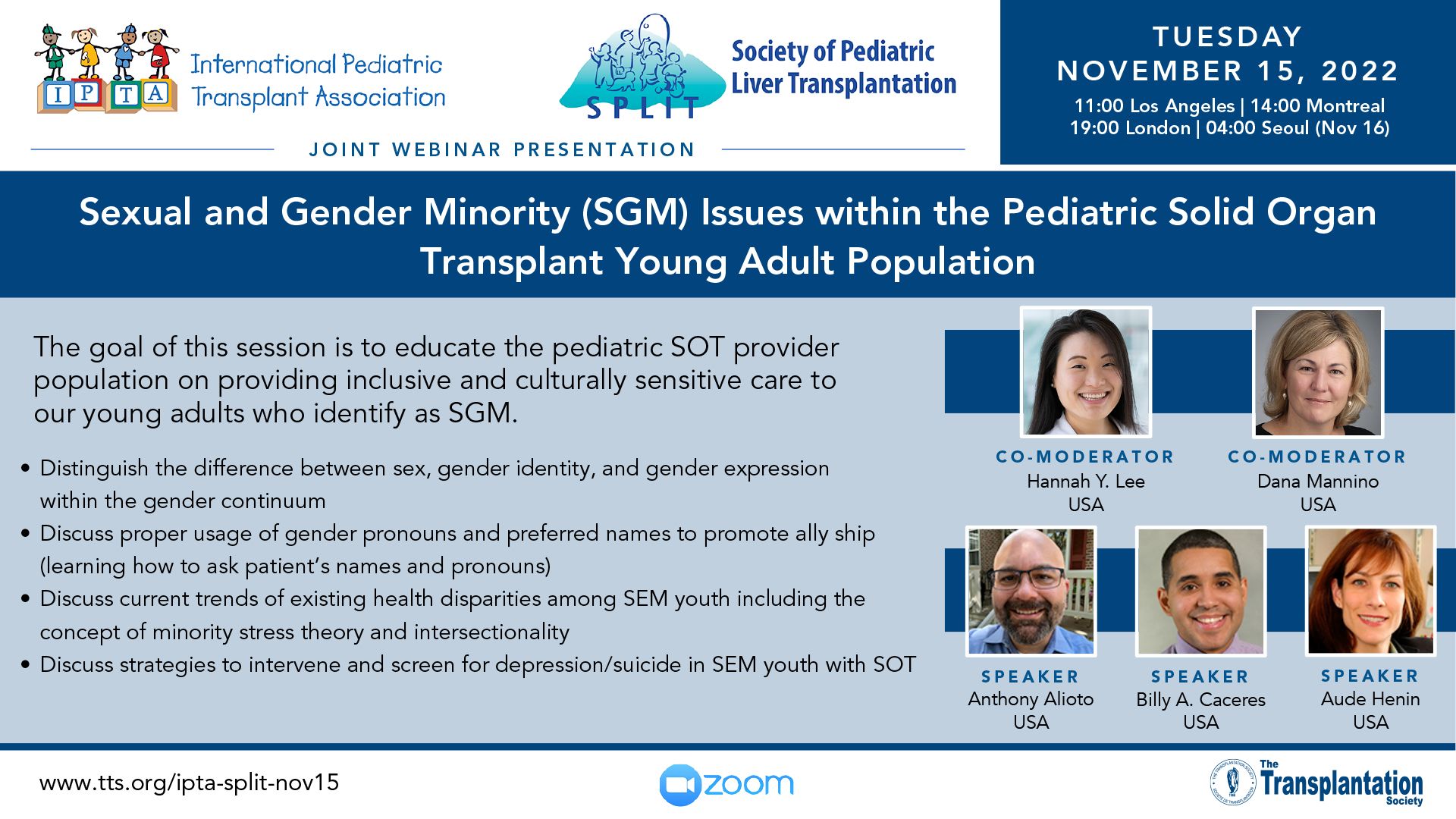 The Asian Society of Transplantation is a TTS affiliated society and this congress is endorsed by TTS. 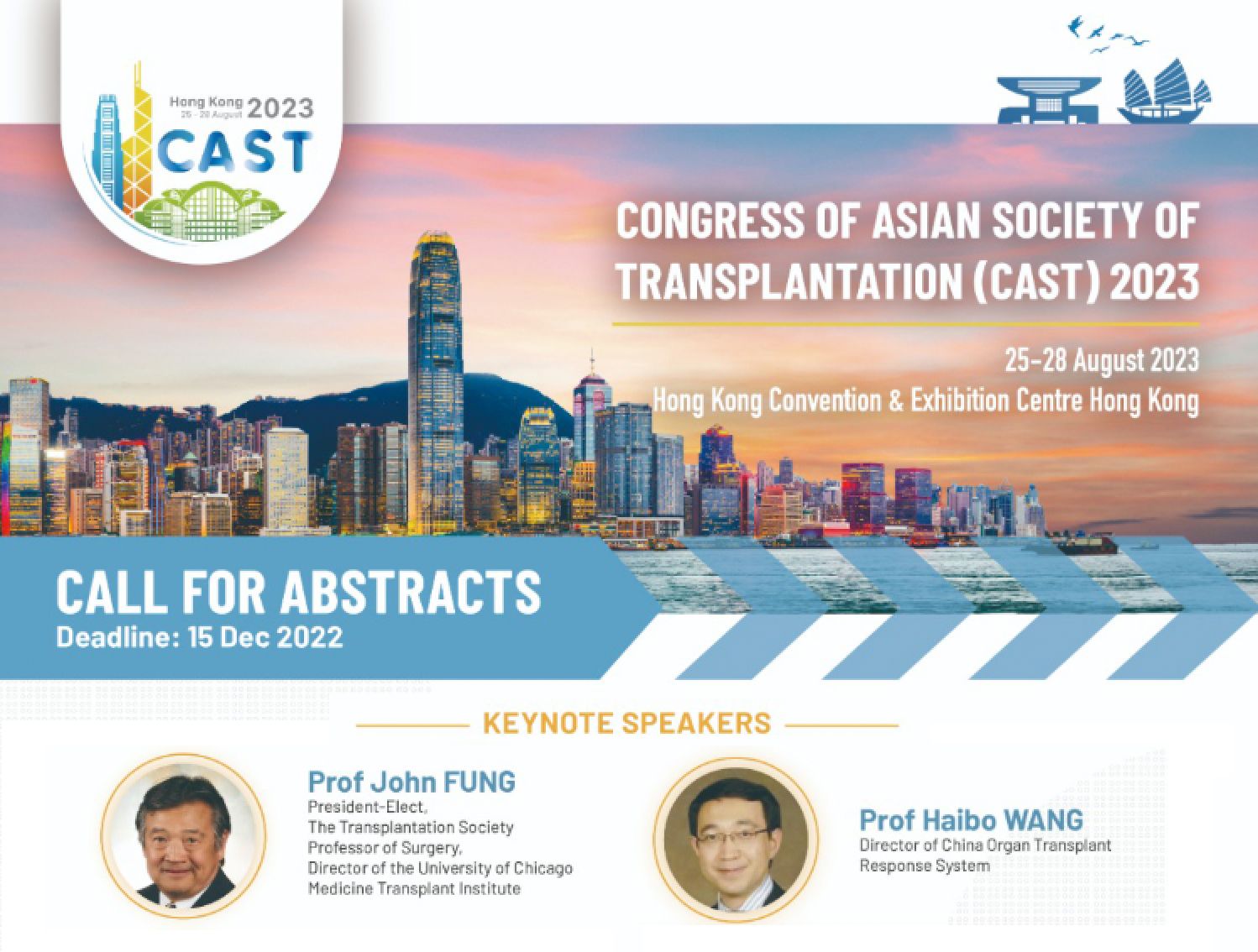 In Case You Missed It - Recent Webinar Presentation 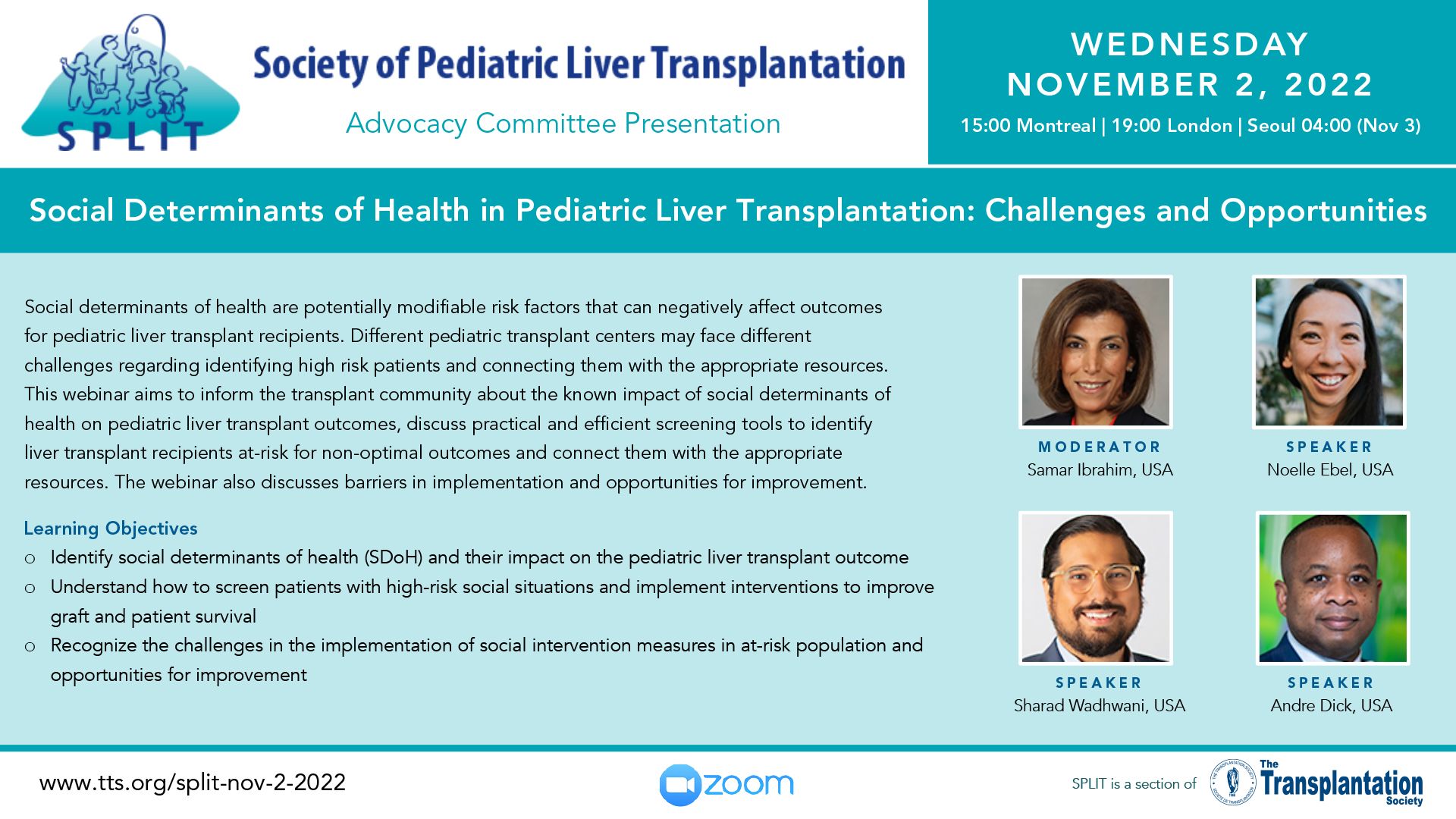 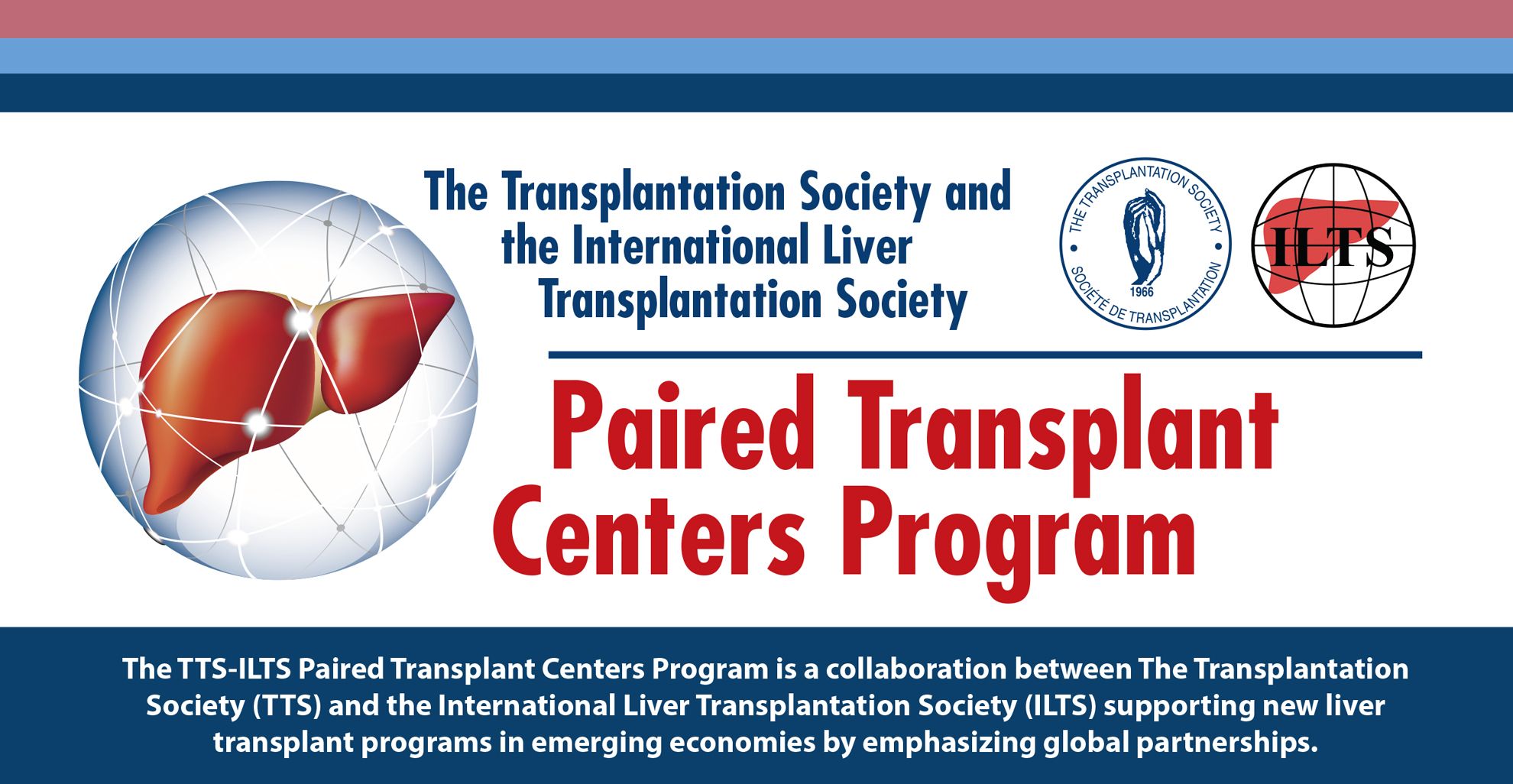 Deadline to Apply: January 1, 2023
Program Start Date: April 1, 2023
WHO
An experienced supporting transplant center (SC) in the developed world is paired with an emerging transplant center (EC) to facilitate vital multidisciplinary training and an exchange of knowledge and expertise.
WHY
The project aims to benefit both centers. The SC is involvedin global health, and promotes ethical and competent transplantation in regions of the world with limited or no current access to transplantation. The EC connects with a multidisciplinary team of experts in transplantation from a world-leading center.
GOAL
The ultimate goal is for Level 3 centers to graduate and become true local centers of excellence for regional training and support.
STEPS
The TTS-ILTS Paired Transplant Centers Program is bound by a limited budget which it cannot exceed. This budget is divided over all center pairs who receive a different financial allocation dependent on their level within the program.
Programs Launched in April 2022
Dow Universtiy Hospital, Karachi, Pakistan paired with the University of Chicago, Chicago, USA

TTS and ILTS congratulates these teams and wishes them every success in their collaborations over the next six years and beyond.

Oct. 26 - Letermovir effectively prevented cytomegalovirus disease among kidney transplant patients with fewer side effects than valganciclovir, according to a study presented at IDWeek.

Oct. 27 - In non-transplant patients with chronic kidney disease (CKD) and diabetes, the use of sodium glucose linked transporter inhibitors (SGLT-2i) has been shown to reduce cardiovascular mortality, delay CKD progression, and decrease proteinuria. The early safety outcomes of SGLT-2i has been validated in published data. However, there are few data available on the long-term benefits among kidney transplant recipients.

Oct. 27 - Although recipients of all organ types develop additional skin cancer, age at transplant was a greater predictor than organ type for recurring cases, according to a cohort study.

Oct. 27 - Development and progression of basal cell carcinoma (BCC) were more common among organ transplant recipients (OTRs) compared with the general population, and the former also had a higher rate of deep invasion, according to new study findings published in Archives of Dermatological Research. 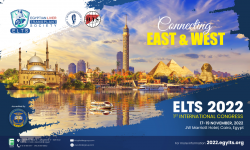 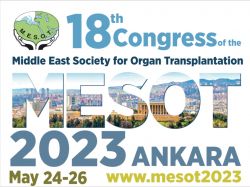 May 24-26, 2023
Ankara, Turkey
18th Congress of the Middle East Society for Organ Donation